The widow of former Richmond footballer Shane Tuck has threatened to withdraw her participation in a proposed coronial inquest into the circumstances surrounding her husband’s death after the state coroner Judge John Cain indicated he would not delve deeply into how the AFL and clubs treated players who suffered concussion in the past.

Katherine Tuck’s lawyer Greg Griffin said there was no point in his client being involved after Cain indicated during a directions hearing at the Victorian Coroners Court that he was “far more interested in what the current state of play is in relation to the management of concussion and head knocks in the AFL and boxing”.

Griffin told the coroner that his client would be deeply distressed if the inquest took the view that how the AFL treated concussions in the past – and in particular the treatment Tuck received when concussed – was not relevant and focused solely on how they treated concussed players now and in the future.

“We would ask your honour in the course of the coronial investigation to perhaps look at the sins of the past to see how they can’t be repeated,” Griffin said.

However, the coroner said that although he understood the concerns, he would not embark on an exercise in determining what Richmond should have or should not have done in treating Tuck.

Tuck, who played 173 games with Richmond between 2004-13, died of suicide last year. He also played state league football in South Australia and had five fights as a boxer after his AFL career ended. 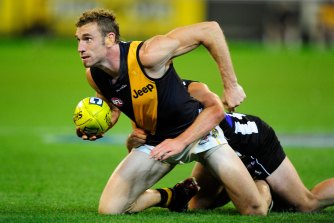 Shane Tuck in action for Richmond in 2012.Credit:Fairfax Photographic

The Australian Sports Brain Bank diagnosed Tuck with CTE earlier this year, with the former Tiger now one of four ex-AFL players to be posthumously diagnosed with CTE. “Polly” Farmer, Danny Frawley and Murray Weideman are the other three players.

“What you are seeking to do is invite me to apportion blame as to what has occurred and that is not my role, frankly,” Cain said.

However, he did indicate he would put the current concussion policies and protocols of both the AFL and boxing under the microscope. The coroners court has reached out to UK concussion expert Dr William Stewart to provide expert advice as to the efficacy of what the sporting bodies have in place.

Representatives from the AFL and the AFL Players Association supported Cain’s focus on present and future practices.

Gideon Boas, the counsel assisting the coroner, indicated part of the draft terms of reference included reviewing whether the AFL’s policies, guidelines, rules and practices were reasonable and proportionate to address the risk of CTE occurring as a result of the head injuries that AFL players incur based on research and scientific evidence.

Cain said he was not yet certain whether a coronial inquest was needed, but time had been set aside in March 2022 if such a hearing was needed.