Cash could be back on the table for struggling clubs as an incentive to relocate as the NRL considers options to expand the game into new markets.

The governing body has begun the process of formulating a strategy for the game’s future footprint, a process likely to take 12 months. The project will determine whether to add to the existing 16 teams or to relocate struggling Sydney franchises to new markets. 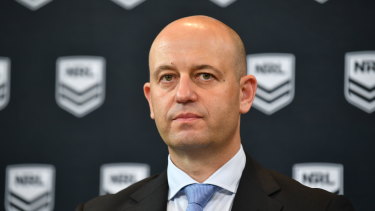 The majority of clubs are united in their belief that the game isn’t ready to accommodate more teams given several existing ones – despite a huge increase in funding from head office – remain in the red. While they all appear viable at present, the NRL has made it clear it isn’t in a position to bail out a club in danger of folding.

League Central has previously dangled an $8 million carrot for clubs prepared to willingly relocate, an incentive to secure their future while expanding rugby league’s reach. That offer, first tabled more than a decade ago, has never been taken up and isn’t currently available. However, the Herald has learnt the NRL will revisit the prospect of putting up a similar financial sweetener as part of its current research into the matter.

The prospect of Sydney clubs being shifted has the potential to disenfranchise existing fans as the game attempts to attract new ones. However, a relocation is likely to be more palatable if the clubs themselves make the call, a result more likely if they can secure their financial futures.

Manly and Cronulla have been mooted as the clubs with the largest clouds over their futures despite recent on-field success. The Penn family has knocked back several approaches to sell Manly, while the Sharks have long operated on a shoestring budget in a bid to make ends meet. Super League architect John Ribot believes those teams should relocate to Perth and Adelaide to give rugby league a truly national footprint.

NRL chief executive Todd Greenberg gave the strongest indication yet that Perth and Brisbane were in head office’s considerations during an appearance with Phil Gould on Nine’s 100% Footy program on Monday night.

Speaking on Nine's Six Tackles with Gus podcast on Wednesday, the Panthers supremo predicted the NRL could one day support a 20-team, two-conference competition and that relocation was a better option than extinction for a Sydney club. However, he said all options presented challenges.

“I think [relocation] is probably the most palatable for anyone that is struggling to exist in its current form,” Gould said.

“Whether or not the new area accepts a relocation, or whether or not it wants an identity of its own to start from scratch, they’re big arguments.

“Relocation … can you imagine if, say, Ipswich or Redcliffe, that area was to be given a franchise but we’re going to move that team from Sydney to come there. Do the locals feel like that’s their team? I wouldn’t think so.”

Rugby league hasn’t had 20 teams competing since the days of Super League and it remains to be seen if broadcasters and other stakeholders have an appetite for that amount of content.

“Relocation is a soft way or saying, ‘You’re done. You’ve got to move’. That’s a soft way of doing it,” Gould said.

“So, the arguments will be along the lines I guess of, do we bite the bullet and go to 20 teams and have two 10-team conferences around the country?

“It’s an option worth discussing, but then what do those conferences look like? Is it a Sydney conference and a regional conference? But then, does that survive? These are things that you’ve really got to look into.

“In the initial stages, that’ll be whether it dilutes the talent too much and we’ve got enough players to sustain it. I think if development’s done right, over time we’ll find the players and we’ll find the competitiveness across the board.

"I think our game has to look at particularly those two locations [Brisbane and Perth]. It's a conversation that should be going on."