Fresh questions are set to be raised over Stephen Coniglio's controversial axing last week after the skipper's spell in the wilderness lasted just one week.

Axed for the crucial game against Melbourne, Coniglio is back in the Giants' 22 as last year's grand finalists aim to conjure a last-round miracle and qualify for their fifth finals series in a row. 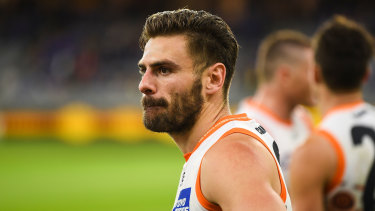 The first AFL captain to be dropped in 22 years, Stephen Coniglio returns to the Giants side this week.Credit:Getty Images

"We'll welcome Stephen back into the side. We understand it was a big decision last week to leave him out but he's freshened up, trained really well and is looking forward to playing the footy we know he can," Giants coach Leon Cameron said.

With gun youngster Tom Green playing such an impressive game in the midfield last week, it remains to be seen how Coniglio's time will be split between the engine room and in attack.

Tenth on the ladder, the Giants need to beat the Saints and have other results fall their way to reach the finals. Unless the Giants can win by enough to overtake the Saints on percentage, they will need both the Western Bulldogs and Melbourne to lose in order to grab eighth.

"It's a massive game for us on Friday night regardless of whether it means it means we end up playing finals or not, we know that’s out of our control," Cameron said.

"What we can control is going out there and putting our best effort forward and I think we have been building for a few weeks towards that."

Rested last week, young forward Jake Riccardi comes back at Himmelberg's expense after making a huge impact in his first four senior games. Seasoned defender Adam Kennedy paid the price for a wayward kicking display in a game where the coach bemoaned his side's lack of composure.

"He’s had a great start to his footy career but played four games in a very short amount of time so we think the game off will hold him in really good stead to come in and compete in Friday night footy," Cameron said of Riccardi.

"Harry Himmelberg and Adam Kennedy have been omitted. Like we said last week, if you’re not performing at the level we need then you’ll find yourself out of the side. Both of these guys are quality players and they’ll bounce back."