Coach Michael Maguire has promised the Tigers will be a “different team” next year, but whether the coach will be the same is still up for debate.

The Bulldogs thrashed the Tigers 38-0 at Redcliffe in the final round of the regular season to put the final knife into what has been a woeful season for the club.

Calls for Michael Maguire’s sacking are sure to intensify in the coming days after the Bulldogs chalked up the biggest-ever winning margin by a team coming last in the final round.

The previous record was set back in 1988 when the bottom-placed Knights defeated the North Sydney Bears by 32 points in the final regular-season game.

Asked whether he was still the right man to lead the Tigers post-match, Maguire answered in the affirmative. Whether his board agrees is another question.

Changing teams and changing pathways of clubs takes a little bit of time, it doesn’t mean you can’t get better performances, I acknowledge that. But it’s about continually just sticking to the path of where we are going with this group.”

Bulldogs half Lachlan Lewis stood accused of trying to steal a speaker belonging to the NRL this week, but on Sunday afternoon, the Tigers could have been rightfully charged with robbing the club of a day’s pay.

If the seven Bulldogs tries put past them wasn’t enough, the club also came away from the game with two major injuries.

In the first half, the game had to be halted for a medicab to drive across the pitch in order for Tigers star Tommy Talau to receive medical attention. It has since been confirmed Talau has torn his ACL. Jake Simpkin also came off the field with a dislocated shoulder.

With the score 16-0 at halftime, anyone who watched the Tales From Tiger Town documentary would have had little trouble imagining the spray Maguire would have given his players. 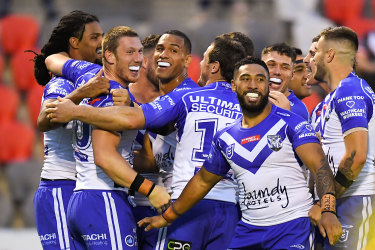 The Bulldogs celebrate another try.Credit:Getty

The win proved a shining light for the Bulldogs at the end of a dark season. Just maybe, we will look back at this match as the game which propelled Canterbury into a new era. Or at least that’s the hope of Bulldogs fans and Trent Barrett.

With Josh Addo-Carr, Matt Dufty and Matt Burton arriving for 2022, the grit and determination from the wooden-spooners on Sunday night was exciting to watch.

Despite nine players from the 2021 Bulldogs departing ahead of next year, Sunday’s game also put on display the best of Canterbury’s up and comers, something we have rarely been treated to this year.

It was also a fitting send-off for Will Hopoate who is departing the club for a Super League stint, kicking the final conversion with a spectacularly large grin to round out the Bulldogs season on a high.

“We’ve got some young guys in there and I don’t want them to forget what [winning] feels like,” he said.

“People don’t see how hard they work and how hard they prepare and we’ve got blokes in there who have been prematurely put into first grade through circumstances and they’re going to be better for it next year.”