Collingwood presidential candidate Jeff Browne has struck a deal with dissident member Francis Galbally to shelve his spill motion and support a probable new Browne-led board.

Browne released a statement saying he had met with Galbally, who has been a backer of Browne through the board challenge process, and persuaded him to withdraw his spill motion, which was to have been put for a vote at the club’s annual general meeting. 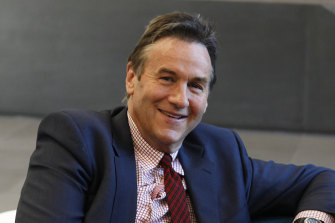 Browne, Renee Roberts and Barry Carp have nominated for the Collingwood board in a postal ballot to be held ahead of the AGM on December 16.

Browne is expected to win sufficient votes to be elected to the board and to then be voted in as president.

Browne is the only candidate for the board who has declared they will nominate to be president if elected to the board. Current president Mark Korda said last week he would not seek the presidency next year in his final year on the board.

“An election for a new president of Collingwood will be held immediately following the AGM and I confirm that if elected to the board, I will offer myself as a candidate for the presidency,” Browne said.

“I have spoken with Francis Galbally and asked him to support this process in lieu of proceeding with the petition to spill the whole board and Francis has agreed to this more orderly process, and he will seek to withdraw the petition.”

Galbally’s petition of members calling for a spill of the board was served on the club last week and was to be presented at the AGM.

Any spill motion, if it were to be supported at the AGM, would have led to another election of all board positions in March next year.

Carp was one of the signatories to the petition, and he is now a strong chance to be elected to the board ahead of the AGM. Thus, if Galbally proceeded with the spill motion, Carp would have been in the unusual position of being a signatory to a petition to spill a board to which he had just been elected.

Galbally confirmed that he had agreed to withdraw his spill petition after Browne reached an agreement with the board.

“I propose to do so. I trust Jeff’s judgment,” Galbally said.

“He’s reached an accommodation and I think it’s appropriate we move forward and rebuild the club.”

AFL trades 2021: Stay across the moves, news and what it all means as our Real Footy newsletter goes daily for trade period. Sign up to get it here.