Brett Ratten says the prospect of including midfielder Dan Hannebery for his first game since round five "looks like a risk worth taking" as St Kilda look to nail down a finals spot against GWS on Friday night.

Holding a 9-7 record and a healthy percentage of 111.4, the Saints will make at least one change after Zak Jones suffered a minor hamstring strain in last week's loss to West Coast. St Kilda will also look to tinker with their team balance, meaning Jake Carlisle is in contention to play. 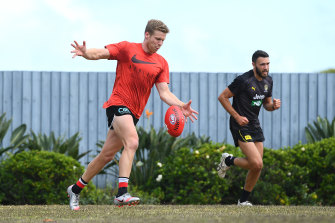 Risky business: The Saints could bring Dan Hannebery back for round 18, his first appearance since round five.Credit:Getty Images

Hannebery joined the Saints in Noosa this week after spending two weeks in the AFL's transition hub on the Gold Coast, where he underwent intensive training with Geelong's Gary Ablett and Richmond's Shane Edwards.

Ratten didn't shy away from 29-year-old Hannebery's injury history as the Saints weigh up the risks associated with bringing him back in the final home-and-away round instead of a likely elimination final.

"When you're here and you watch him run around and everything looks good – he's vocal, he's a leader of our team and he influences others – so you say that would be nice to have him on board. But we do have to consider the other things as well."

Ratten said Hannebery, who had surgery in Victoria this year for a hamstring tendon injury, had done "a helluva lot of work" in the transition hub, where he was supported by Jarryd Roughead.

"He's probably been able to do a little bit more work earlier being in the hub, and having the opportunity to work one-on-one and training more specifically.

"The hub life's probably been good for him."

St Kilda are going through all scenarios, including the possibility that the former Swan is picked to play on Friday night before getting more match practice during the AFL's gap period before the finals

"We've thrown a lot of things up and that's probably the last bit of the puzzle," Ratten says.

"It's a risk, but it looks like a risk worth taking."

Ratten conceded the Saints were contemplating adjusting their team structure, with Dylan Roberton also in the mix for what would be just his second match of 2020.

"We thought we let one slip," reflected Ratten on last week's defeat against West Coast. But he took a glass-half-full stance when reflecting on the season.

"Really at the start of the year if you said we were going to be nine and seven going into the last round with the opportunity to play finals, we would have put our hand up every day of the week.

"We've played some really good football through the year, but we just let ourselves down in periods.

"The Geelong game, the Collingwood game – they're the two that they blew us away. But outside of that, we've been in every game."