Charlie Curnow turned in one of the best performances of his career as Carlton announced their arrival as a genuine top-four contender after holding off Sydney in a Friday night classic at Marvel Stadium.

The Blues turned in a powerhouse second quarter in which they slammed on nine goals then gave their fans the customary second-half jitters before steadying to win by 15 points. 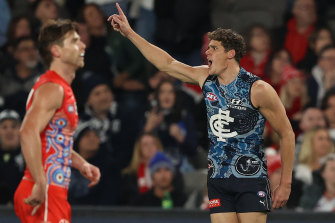 Charlie Curnow celebrates one of his goals.Credit:Getty Images

Michael Voss’ men are not the complete package yet, but if they can put together four quarters Melbourne and Brisbane will have company for this year’s flag.

The Blues’ best is sublime but their worst leaves the door ajar for their rivals. No team has yet barged through it though that day will surely come.

Curnow booted six goals in a best-on-ground performance, in the process sending a signal to the football world that he can be the main man in Harry McKay’s absence. 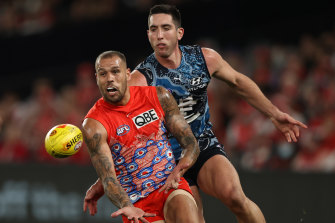 Their win was built on the dominance of their midfield, where Sam Walsh and George Hewett controlled proceedings. The Blues are excellent in the clinches and were too tough for the Swans, a club which has made its name in hand-in-hand combat but whose current crop can be vulnerable in this area.

Jacob Weitering blanketed Lance Franklin, holding strong under immense pressure in the second half when the Swans mounted their charge.

The Swans could not mark Dane Rampe’s 200th game with a win, and the loss was compounded by what appears to be a significant hamstring injury to Josh Kennedy.

Kennedy came off second best after bungling his attempt to spoil Sam Docherty, who was left dazed by the high contact though recovered to play out the game.

The first quarter proved a false economy for the Swans, whose slender lead at quarter-time was due to their accuracy in front of goal and not a reflection of general play.

When the heat came on in the second term, they crumbled in a manner uncharacteristic of the club in the Paul Roos/John Longmire eras.

The Blues were brutal out of the middle, pumping the ball forward where Curnow reigned supreme. As dangerous as he was, it was when the ball hit ground level where the most havoc was wreaked.

On the rare occasions they were not gobbled up in bruising tackles, they were racked with uncertainty, as seen in Chad Warner running too far when seemingly well clear. Even Tom McCartin, whose courage cannot be questioned, was not as sure as he normally is under the high ball.

Curnow was unstoppable, outmanoeuvring McCartin in one-on-one contests and losing him on leads with his repeat efforts. He was quelled by Rampe after half-time though the Swans’ improved work rate played a considerable part.

The game swung dramatically in the third term when the Swans belatedly got to work at the contest. Luke Parker, a key figure in the week’s main plotline lifted, earning the jeers of the partisan crowd. Braeden Campbell provided the control and bounce from half-back lacking in the first half.

Logan McDonald was a threat in attack, and the comeback was well and truly on when Franklin drained a long bomb.

The No.19 has brought much joy to Carlton fans in dark times – and there’s every chance it will put more smiles on Navy Blue dials in the years to come. Eddie Betts’ number is in good hands with Corey Durdin. The 20-year-old, last week’s Rising Star nominee, was a livewire when the ball hit the ground, booting two goals. His best was a dribbling effort off the outside of his right boot from the forward pocket.

Perhaps it was the small red and white contingent in the house or the mark of respect in which George Hewett is held, but the former Swan was spared the hot reception a player normally gets from his former teammates and fans in his first game against his old club. Chad Warner has a bit of go about him but his greeting at the first bounce was most respectful. There was nothing resembling a jeer either on each of the 32 times the former Swan found the ball.