Collingwood star Ash Brazill has embraced a new position on the football field for her AFLW comeback after taking a break from the sport to win Commonwealth Games gold in netball.

Brazill, an All-Australian key defender who also plays in defence for the Australian Diamonds, says her move to the Magpies’ forward line has been an adjustment but one she is enjoying. 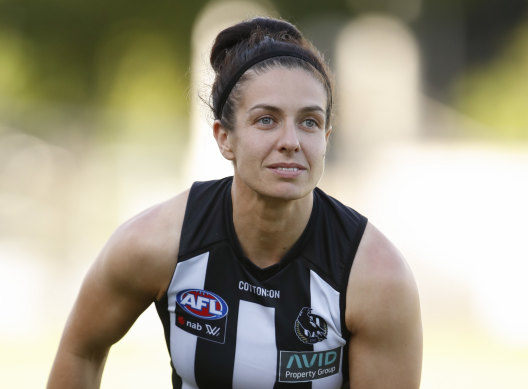 “It was great to get back out there [but] going from half-back to a forward has thrown me a little bit,” Brazill said this week.

“And I’m a defender in netball as well, so, to come out and be an attacking player has completely changed the way I look at footy and I’m enjoying it more because I’m able to learn something completely different.“

Brazill took a break from AFLW to focus on the Games but returned for the Magpies’ loss to Adelaide last weekend.

Her welcome back included a blood nose, after a collision in a contest.

“Getting a knock to the nose, first blood nose ever, I think it was a great welcome back to footy and I just can’t wait to get back out there and hopefully get a win,” she said.

“For us, I know we’ve been trying to change the way we play our game [and] making it more professional. We’ve got different people like our strength and conditioning coach coming in and a lot of our game is focused on speed now and endurance.

“The fact that we lost last week just gives that extra fire in the belly.”

Collingwood host expansion team Essendon at AIA Centre on Friday at 3:10pm after the men’s AFL grand final parade at the MCG and Yarra Park.

Essendon’s forward and former Magpie Sophie Alexander said the rivalry clash between the Bombers and Collingwood on Friday has “been a long time coming”. 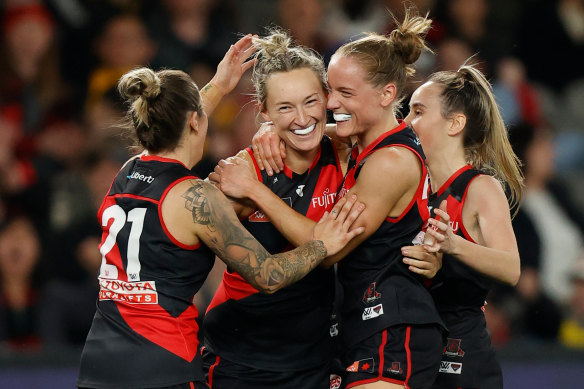 Essendon play Collingwood for the first time on FridayCredit:Getty

“It’s so exciting that we finally get to meet. There’s always that rivalry between the men’s teams and hopefully that comes out in the game on Friday,” Alexander said.

The Bombers have notched two wins and two losses, while Collingwood are in their seventh season, have made regular finals appearances and have lost just one match this season, to the reigning premiers.

“Coming in as an expansion side, we’ve got no expectations, we’re playing with that freedom and that’s probably why we’ve had those closer match ups,” said Alexander.

“They’ve been sitting up probably top four the last couple of years and so it’s going to be quite a good test to see where we’re sitting against a team that’s quite established in this competition.”

Meanwhile, radio and television sports journalist and broadcaster Kelli Underwood has won the 2022 AFL Football Woman of the Year award, presented by the Essendon Women’s Network.

Underwood took the mantle from TV and media football personality Shelley Ware. Underwood is the host of ABC’s Offsiders, a panellist on Fox Sports’ The Back Page, a commentator of men’s and women’s football on ABC Grandstand and Fox Footy, and was the first woman to commentate a men’s AFL game on TV.

Lisa Egan, chair of the Essendon Women’s Network congratulated Underwood and said, along with being a talented broadcaster, she has been influential in helping more women enter and thrive in the industry.

“Kelli is a trailblazer and has invested a lot of time mentoring female broadcasters and journalists,” said Egan. “We are thrilled to see her honoured as this year’s Football Woman of the Year.”

Emma Race, who was runner-up to Underwood for the award, offered her praise, saying: “It is so great to have a chance to celebrate the impact Kelli has had on footy. She gives back to the game and invests in the next generation. To me, she is a hero.”