Home » At last, the Cats can unveil the Tom and Jeremy show

Jeremy Cameron made an immediate impression on former Geelong star and forward coach Corey Enright when he loomed in the doorway of Kardinia Park for the first time.

“The first thing that struck me was how tall he was,” Enright said. “He’s bigger than what I thought. That’s a common thing. You don’t know until you stand up close to them how big and strong they are.” 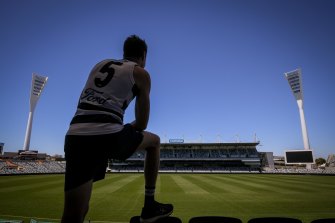 On the training track, Cameron grew again in Enright’s estimation. “I’d been watching him from afar and I told him that,” he said. “But when you actually get them into your club and see how they think and move, you don’t have a full understanding.”

On Saturday, after an injury delay, Geelong get to see the former Giant and still towering Cameron play alongside their long-time resident man mountain Tom Hawkins. On presence alone, they are one and one adding up to three.

Coach Chris Scott isn’t even pretending to remain po-faced. “I don’t want to hose down the expectation around what that two might provide,” he said last month, “because clearly we have brought them in to be two of the best forwards in the competition.”

Cameron’s emergence might prove timely. The Cats’ start to the season has been sluggish and Cameron’s was false, thanks to a hamstring niggle. “Jeremy missed a little period of pre-season training, which in the normal scheme of things would have amounted to a rounding error,” Scott said, “but because it was so short for us it was more significant than previously. But the signs are good.” 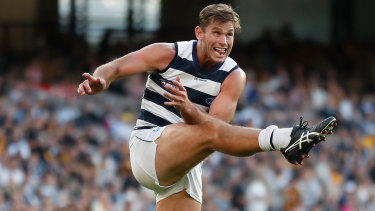 Goalkicking guru Matthew Lloyd envisages how Hawkins and Cameron might pair their strengths. “Cameron’s been a wonderful player, the best forward the Giants have ever had,” he said. “But I don’t see him as the No.1 forward.

“[You want to] let him run and rove. That’s his biggest strength. He’s so good at ground level. He’s so good kicking from 45-50 metres out, whereas Tom’s best place is close to goal. 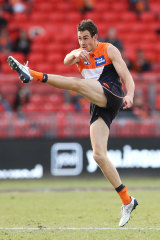 Jeremy Cameron as a Giant in 2020.Credit:Getty Images

“Cameron was at his best in his early years at the Giants when he used to get up the field, and work his way back towards goal. So they complement each other really well, with Hawkins being that hulking player 0-25 metres out from goal and Cameron a little bit higher and working back towards goal.

“And they’re both beautiful kicks, field kicks too. It may take some time, but I think they’ll use each other well, in general play as well.

“They’re so different as players. It’s like Jack Riewoldt and Tom Lynch. They work for each other, and I think that’s what Hawkins and Cameron will do as well.”

But Lloyd cautioned against expectations of instant alchemy. At Essendon, he had to learn the moves and idiosyncrasies not just of partner Scott Lucas, but players further afield. “I knew they kicked the ball in different ways, liked to deliver it in different ways,” he said. “Some like to dart the ball in fast. ‘Longy’ [Michael Long] just loved to sit it out in front of you, to run onto it.

Of course, there are many moving parts besides Cameron and Hawkins. There is the difference in style between the Giants’ game and Geelong’s and the difference in the way footy is being played between last year and this. It’s benefiting tall forwards, but will two be too much of a good thing?

There are also 34 other players out there. “It’s not as simple as go here, go there. Chemistry with the rest of the team is important,” said Enright.

Cameron’s unscheduled extra time out at least will have given him and the Cats extra time to work on the theory. On Saturday comes the practice.

Scott is less concerned with how the parts fit together than their sum. “I think the best forward lines in history in the best teams have been really cohesive and Tom has proven himself to be a very unselfish forward,” said Scott. “Even when he kicks a lot of goals in seasons, he is always high for assists as well.

“I guess if I could have my way, one would be kicking it to the other a fair bit.”