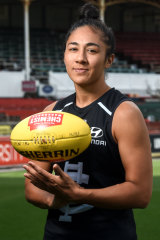 Carlton AFLW star Darcy Vescio says players are ready for the league to extend the season, arguing it would increase standards and reduce the pressure on women to treat each week as high stakes.

The AFL was heavily criticised for refusing to lengthen the campaign this year when two new teams, Geelong and North Melbourne, entered the competition.

A collective bargaining agreement, that proposes an 11-week season in 2020 and 12 weeks for 2021 and 2022, is currently being weighed up by AFLW players. Women's football sources have previously told The Age that portions of the playing ranks are keen for a longer season.

Vescio, the code's top goal kicker, said the shorter season added enormous pressure on players who had to think about the win-loss ratio from week one and treat each match like a final.

"AFLW is different to what we're used to," Vescio said.

"It feels almost like a high-pressure finals series as opposed to a season. I'd argue that we haven't seen the peak performance of any AFLW team as that form builds later on in regular length season heading into finals."

The 26-year-old forward was on Wednesday morning at the unveiling of a Tayla Harris statue that has been temporarily erected at Federation Square.

At the launch, AFL commercial manager Kylie Rogers said the league was in the process of negotiating the CBA as well as researching the "optimum" season for female players.

"Obviously women are made very differently to men and we're very aware of injuries and optimal periods – it's not an easy decision to make," Ms Rogers said. 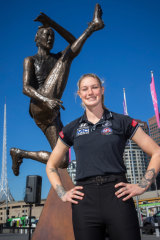 "We want to make an informed decision and ensure we have a sustainable competition that our girls are looked after."

Vescio said AFLW players did not stop playing football when the season ended, and urged caution on arguments around injuries and optimal fixtures.

She said although she realised the intensity of competing professionally, the pressure on players to perform exceptionally over a shorter period of time was more onerous and stressful than a longer AFLW season.

"The idea that our bodies won't cope with more football is interesting," Vescio said.

"After AFLW concludes, many of us slide back state leagues and continue to play during winter.

"At the moment, trying to juggle two seasons in order to get enough games in for the year is the challenge."