Home » Rugby League » AFL to crack down on holding the ball, time-wasting

AFL players have been told to expect tighter holding-the-ball and time-wasting interpretations this season, as the league seeks to avoid congestion, keep games moving and reduce the risk of injury.

The AFL wrote to all clubs on Monday, outlining plans on how umpires will be “less lenient towards players who have had prior opportunity and do not immediately and correctly dispose of the football”.

Players have been warned that if they choose to evade, fend, duck or neglect a prior opportunity to dispose of the ball, they will be penalised. The AFL hopes a quicker call will help alleviate a tendency for the tackled player to be, as AFL operations general manager Brad Scott said, “dumped into the ground”, thereby increasing the risk of head injury. 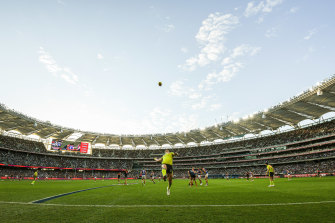 The AFL seeks to avoid congestion, keep games moving and reduce the risk of injury.Credit:Getty Images

However, the AFL insists it still wants to give players the chance to release the ball when initially tackled.

This comes after much angst last season as to what the interpretation of holding the ball should be. Senior coaches Damien Hardwick, Brett Ratten and Chris Fagan were among those confused at various points.

The league has also outlined plans to crack down on time wasting. Umpires “will be less lenient towards players who deliberately delay the play. A free kick or 50-metre penalty will be awarded”.

The tighter interpretations come after consultation with clubs and the league’s competition committee, and were outlined by the league’s executive general manager Andrew Dillon.

“We are looking forward to 2022 being a year of consolidation and, as such, want to reinforce there would be no material rule changes introduced for men’s competitions this season,” Dillon said.

“Following meetings with each of the 18 AFL clubs across November and December last year, we have worked closely as a football operations and umpiring department to tighten up on the interpretations of existing rules relating to time delay and holding the ball.

“The tightening up of these existing rules comes after the Game Analysis team, made up of AFL and AFL club staff, identified trends in the way the game was being played and umpired in the AFL and aims to deliver a game that is played and umpired in line with the spirit and intention that is consistent with the Laws of Australian Football.”

The average number of tackles per game dropped to 57.4 per game last season – the lowest average since 2008 (53.6) but there were outliers. The Giants and Suns combined for 176 in round 17, but there was a feeling the new standing-the-mark rule may have contributed to less congestion, and tackling.

While a harsher interpretation of holding the ball will be welcomed, Leigh Matthews, a four-time premiership coach and arguably considered the greatest player of all time, told The Age in October that the player winning the ball needed time to kick, handball or tap.

“People have different philosophies. Some people, for instance, think there should not be prior opportunity at all, which I am completely against,” Matthews said.

“It means if you get the ball, and get tackled … I just think you have got to give favours to the bloke with the ball. That’s my basic philosophy.

“My philosophy is to protect the bloke who has got the ball in his hands, given that he has got it.”

The AFL has also moved to reduce head knocks and concussions by warning players they face suspensions should they choose to bump – leading to an injury – rather than tackle.

There were flashpoints through the 2021 campaign where decisions to bump or tackle a player while pinning an opponent’s arms split the football community.

The new interpretations are:

In 2022, umpires will be less lenient towards players who deliberately delay the play. A free kick or 50-metre penalty will be awarded under existing Law 19.2 (f).

In 2022, umpires will no longer give a warning to players who deliberately engage in time-wasting and a free kick will be awarded under existing Law 18.13 (d).

In 2022, umpires will be less lenient towards players who have had prior opportunity and do not immediately and correctly dispose of the football when they are legally tackled under existing Law 18.6.2.

In 2022, a free kick will be awarded against a player who ducks their head prior to being legally tackled and does not immediately and correctly dispose of the football. Umpire cues for prior opportunity includes: evading, fending, ducking, has a prior option (i.e. goes to handball / kick and decides not to), is balanced and steady, is awarded a mark or free-kick, or drives their head.