For many Australians, AFL is not just a sport, but a passion, and a business. That often translates to enormous pressure on clubs to succeed. It was evident at the Essendon football club when a supplements program went rogue just under a decade ago that a win-at-all-costs attitude can have dire consequences.

After the Adelaide Crows lost to Richmond in the 2017 grand final, the South Australian team’s senior football and coaching staff believed their players needed to be mentally stronger if they were to win a premiership. But what they did in an attempt to instil such a change in the players rocked the club to its foundations, leading to an exodus of players and senior staff. It is still causing harm to this day. 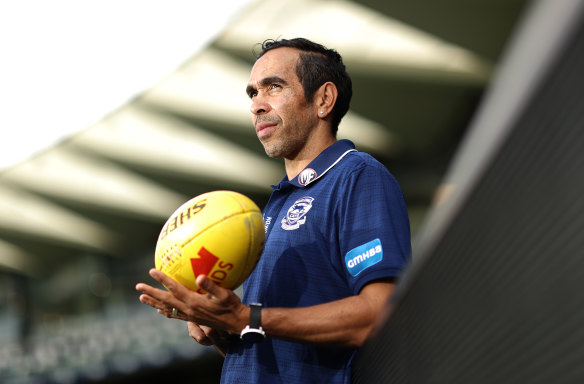 Eddie Betts, now an assistant coach with Geelong, has detailed the emotional pain he has felt since the Adelaide Crows’ 2018 camp.Credit:Getty Images

For several years, there have been rumblings and anonymous allegations about what took place at an Adelaide pre-season camp just months after the 2017 grand final loss. That changed this week when former AFL champion Eddie Betts became the first player who was at the camp to publicly reveal the appalling events that took place. It has sent shock waves through the football community and forced the AFL, the Adelaide Football Club and the players’ association, belatedly, to respond.

In a new autobiography, The Boy from Boomerang Crescent, Betts reveals how during the camp confidential information he had given in a private counselling session had been misused and that those in charge co-opted sensitive Aboriginal cultural rituals in a way that offended him, jeopardised his wellbeing and affected his family life. As he wrote in his book: “There was all sorts of weird shit that was disrespectful to many cultures, but particularly and extremely disrespectful to my culture.”

Adelaide captain and Betts’ former teammate Rory Sloane said on Thursday that “it was a really hard thing to manage because some guys found the camp boring. Some guys had a really horrible experience … Some guys enjoyed their experience.” He said the club and its leaders had numerous conversations in an attempt to overcome the fallout, but they could not find a way to resolve the issues.

The unresolved issues eventually triggered an external review by Adelaide of its club culture, and separate investigations specifically on the pre-season camp by SafeWork SA and the AFL. The workplace safety watchdog and the AFL’s integrity unit found the camp had not breached any laws or AFL rules.

This week, the AFL said its investigation had led to improved governance and compliance relating to the protection of Crows players, officials and staff, including further investment into their integrity department. It also prompted the AFL to introduce an approval process for any club pre-season camps or activities run by external providers.

Adelaide’s external review, led by Hawthorn great Jason Dunstall, laid the groundwork for a series of departures that included senior coach Don Pyke and football manager Brett Burton, and led the board to create the position of head of leadership and culture.

But it was too late for Betts. He says when he tried to raise his concerns with the team, he was dropped from the leadership group. He also believes he was let down by the AFL, telling Fox Footy this week that “I felt like my voice wasn’t being heard and I felt like I needed justice, and it did hurt at first when nothing was done”.

Earlier in the week, the AFL issued a careful comment that acknowledged the hurt felt by Betts, his family and “by extension all Indigenous players”. However, by Thursday, AFL chief executive Gillon McLachlan stepped up the response, labelling some activities at the camp “a disgrace”. He apologised to Betts and any other players still suffering because of what happened.

Adelaide chief executive Tim Silvers, who was not at the club when the camp took place, has also apologised to Betts, stating: “I think we can move forward, but we’d like to say sorry to Eddie and anyone else that had a negative experience throughout the camp.”

While the AFL made it clear it had no intention on reopening its investigation into the camp, the AFL Players Association was more open to revisiting the issue. Chief executive Paul Marsh said the information in Betts’ book was new to him, and that he believed players felt pressured to remain silent when the association approached them after the camp. He committed the association to contact all the Adelaide players from 2018 to seek a better understanding of the camp and any issues that may have arisen from it.

The camp was run by Collective Mind, a Queensland-based consultancy group that promotes itself as providing “a suite of mindset tools and a cutting edge leadership development framework”. The group sued The Age and Nine for defamation after it published player accounts in 2020 of what went on. It is unclear whether they will take Betts to court, but the defamation case has certainly inhibited public discussion on the camp until now.

So what should we take from this sorry saga?

Few would now question that some of these young men were badly let down by the machinery of the football world and some senior staff at the Adelaide club. As with the Essendon saga, victory was seen to justify things that were plainly wrong. The AFL and Adelaide have made changes, but as Betts’ brave book discloses in graphic detail, the mental scars have yet to fully heal.

The Age reported on the Adelaide Crows’ camp in 2020 in a story that included a number of similar allegations to those in Eddie Betts’ autobiography, and other allegations. Collective Mind and its leaders sued for defamation. In December 2021, The Age and Nine made a business decision to settle the case and issue an apology without admitting that the story was inaccurate.

Gay Alcorn sends an exclusive newsletter to subscribers each week. Sign up to receive her Note from the Editor.