In today’s AFL Briefing, your daily wrap of football news

St Kilda have added former Blue Liam Stocker to their list, signing him as a rookie during the pre-season supplemental selection period.

Stocker, who turns 23 on Monday, has been training with St Kilda during the pre-season after the Blues delisted him at the end of last season.

He played 28 games for Carlton in four years but was unable to cement a spot as a defender despite showing glimpses of his talent. 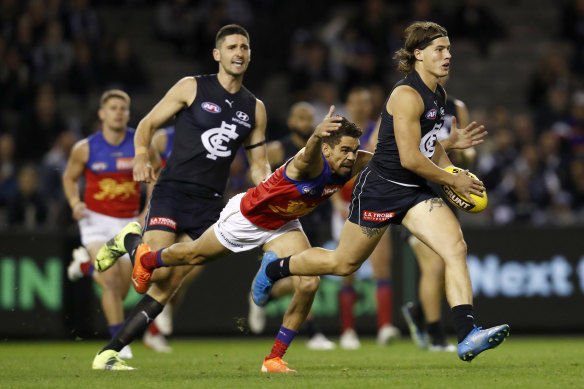 Liam Stocker showed glimpses of his talent at the Blues.Credit:Getty Images

Stocker made a high-profile entry to the game when he was the first player selected in the draft following a live trade between clubs, with the Blues swapping future first-round picks with the Crows to nab pick 19 which allowed them to select Stocker.

The smart ball user, who can win the ball inside the contest, battled however to make an impression at Carlton with injury then COVID-19 interrupting his progress. He played 16 matches in 2021 but just six under new coach Michael Voss in 2022. He admitted after being delisted he almost gave the game away during his time at the Blues due to an aggressive anxiety disorder.

Stocker was chosen by Carlton when Stephen Silvagni was list manager, with the former Blue a potential candidate for the Saints’ vacant list manager position. The Saints, however, have been in no rush to replace James Gallagher.