Sydney star Tom Papley says he is a relieved man after confirming he won't be pursuing a trade away from the Swans and will see out the last three years on his contract.

Papley had sought a return to Victoria at the end of last year for family reasons but the Swans and Carlton – his preferred destination – were unable to agree on a deal and speculation over his future at the club has lingered ever since. 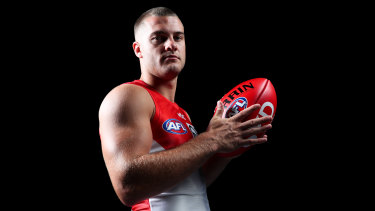 Rival clubs were informed of his intentions over the past week, with Papley now happy to stay in Sydney for at least the remainder of his current deal, which expires in 2023.

While the 24-year-old declined to go into specifics about what has changed regarding his family circumstances, the upshot for Sydney fans is that they won't be losing one of their most important players, popular characters and spiritual leaders.

"I've always loved the club and love the boys – it was nothing about that, it was more about family last year and that stuff's fixed up. I don't need to go into it," Papley said.

"It is a bit of a weight off my shoulders, obviously the media's blowing up a bit about what was going to happen and it's good to just put that behind me now and focus on this game and next year. 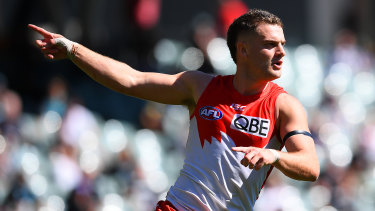 Tom Papley has enjoyed a breakout 2020 campaign and is now regarded as one of the AFL’s best small forwards.Credit:Getty

"It the end of the day I am a contracted player but the boys got a little kick out of it. It's good to let them know that I'm staying and we can move onto big things next year, hopefully."

Papley said he had to earn back the trust of his teammates after requesting a trade last season but it didn't take long for him to work his way back into their good books.

He had a sizzling start to the year, kicking 19 goals in Sydney's first eight games, his emotional celebrations and antagonistic behaviour against opponents often sparking some of the team's best periods.

While he has kicked only three goals since, Papley is now widely regarded as one of the AFL's premier small forwards and is in with a real shout of winning a maiden All Australian blazer this year.

"[The goals] died a little bit away at the back end but that always comes with the position I play – it can be pretty lonely down there sometimes," Papley said.

"I get a tight opponent on me every week and it can be a hard position to play, but the last few weeks, sometimes it's not all about the goals – sometimes it's about setting them up and things like that."

The Swans could finish as high as 14th if they manage to spring an upset over Geelong on Sunday, but overall the club appears to be tracking in the right direction and Papley wants to be a part of whatever success comes next.

"We've got a fair few injuries out at the moment and that will help towards next year," Papley said, referring to star players like Lance Franklin, Dane Rampe and Isaac Heeney who have been sidelined with long-term injuries.

"We're probably lacking that little bit of consistency at the moment but that comes with experience and I'm sure it'll build.

"We've got a lot of guys that will benefit from another pre-season – we obviously don't want to look too far ahead but I think we can really push next year. I'm looking forward to it."