Home » Rugby League » A twist of eight: Can anyone stop the Storm and Panthers?

The finals are finally here. It’s the best time of the year, when champion players and teams rise to the top. Let’s run an eye over the eight teams left standing.

Without question, the Storm will be there grand final day.

Big-game club, been there before, their defence is almost impossible to break down, especially on a dewy night game with a slippery ball, and their attack has evolved as the season’s gone on.

For their star player, Cameron Munster, the bigger the stage the better he goes. He’s been quiet since State of Origin — not a good sign for the other teams.

The team to beat. 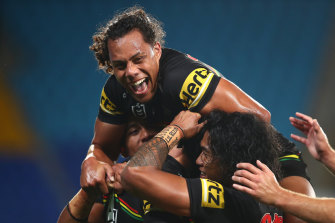 The Penrith Panthers are the team to beat, according to Andrew Johns.Credit:Getty

They have such a well-balanced side that knows who they are because a big chunk of those players have come through the system together.

They complement each other, especially Nathan Cleary and Jarome Luai in the halves, as do Isaah Yeo with the other middle forwards.

They also have a huge X-factor in Tevita Pangai jnr, who they secured mid-season from the Broncos. He’s a massive pick-up.

As for Cleary, he has all the attributes of a champion No.7: control, presence, and a superb kicking game.

Ivan Cleary’s side will have learned so much from last year and their grand final loss to Melbourne. They’re my premiers at this point.

What a shame there’s no Latrell Mitchell. He’s so important to their attack.

Adam Reynolds jabs away. So does Cody Walker. But Mitchell delivers the knockout punch, especially on that left side. When they all combine it’s magical to watch, but they’re missing their most important player. 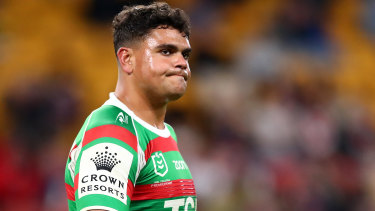 Latrell Mitchell is suspended for the entire finals series.Credit:Getty

They’ll compete hard in games but will miss that freakish play that Mitchell can provide. Think back to Origin II when he stripped the ball from Dane Gagai or pounced to intercept and run 90 metres to score. When something needs to happen, Mitchell does it.

Their player to watch is hooker Damien Cook. Souths need to tweak their attack and play more out of dummy half to bring him into the game.

His speed around the ruck can worry teams as we know, but Walker and Reynolds need to keep pushing up in support around the ball.

They’re likely to meet the Roosters in the second week of the finals because I can’t see them beating Penrith in week one.

The dark horses, mostly because of Tommy Trbojevic. I have never seen anyone like him.

Last week, against the Cowboys, they used some trick shots around the ruck in the middle of the field, which freed up Turbo.

They have an underrated forward pack with plenty of skill and footwork. Haumole Olakau’atu has come along in leaps and bounds on that right side.

And no words can describe how good Turbo has been.

His football intelligence blows me away: he knows when to pass, run, where to put himself into play.

This year has been Trent Robinson’s greatest coaching feat: the Roosters shouldn’t be in the top eight with the injuries they’ve had.

I just worry how much is left in the tank.

Captain James Tedesco has carried this team. We know he’s a superstar but this year, under these circumstances, we’ve seen the competitive monster in him come out.

The Roosters’ player to watch is Victor Radley.

He adds so much to their attack. He owns the middle of the field and links both sides to his halves, which gets them to an edge quickly.

He’s the best ball-playing forward in the game. The Roosters are a 12-point better team when Radley is on the field.

The Eels are the one team outside the four that can win it if things go their way.

The victory over the Storm two weeks ago will give them plenty of confidence. They won that game through emotion and effort. 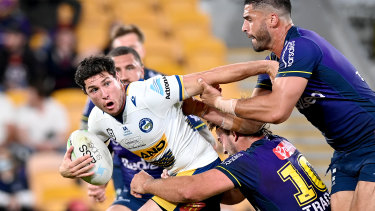 Mitchell Moses and the Eels will take plenty of confidence from their recent win over the Storm.Credit:Getty

When they’re breaking outside their structure in attack, they look at their best.

Halfback Mitchell Moses’ kicking game must be an A-plus for them to win.

Prop Reagan Campbell-Gillard is also back, so they will almost be full strength.

But the most important player is prop Junior Paulo. His late footwork at the line and his late offload can be lethal.

Watch him on the right-hand side of the ruck when fullback Clint Gutherson comes late onto that short pass.

Paulo is the real leader in the pack. They need him firing to be any chance.

I’ll state the obvious: the Knights need to improve their attack – and by a long way.

They need to manufacture sets where they can get the ball to centre Bradman Best one-on-one, something I’m sick of saying. 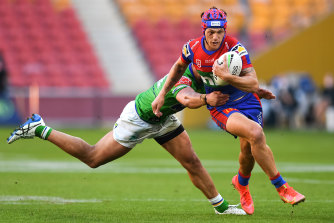 Kalyn Ponga must be in top form for the Knights to fire.Credit:Getty

Their main man is Kalyn Ponga, who needs to produce a faultless performance each week if they’re to worry the top teams.

They play the Eels on Sunday, which is a day game in Townsville, so the surface will be fast.

To win this game, Newcastle need to score 24 points. But can they?

The Forrest Gump of the competition. Like a box of chocolates, you never know what you’re going to get.

I love the way the Titans forwards play. A lot of pre-line passing, particularly from Jarrod Wallace, who’s not afraid to pass from a kick-off. I like the way he’s prepared to move the ball.

Prop Moeaki Fotuaika is a superb player. If the game gets any quicker, he’s going to excel.

They also have the unpredictability of Jayden Campbell; another Indigenous player who’s got the skill you cannot coach.

The Titans’ attack can be so dangerous. They have the attitude that they’re going to score more points than you. They back their attack, not their defence.

I like David Fifita coming off the bench. We all know the wrecking ball that he is. The Titans should cut up some vision of Gorden Tallis at his best and show him.

I don’t know if the Titans can beat the Roosters, but this game will be much closer than people think. If there’s an upset this weekend, this could be it.