The German completed his best lap in one minute, 33.911 seconds, going 0.207 seconds faster than his Mercedes rival Lewis Hamilton on a cool and overcast day at the Shanghai International Circuit. 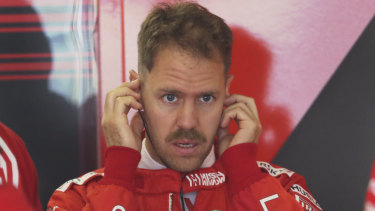 Charles Leclerc, who was denied a maiden win by engine trouble some 10 laps from the end at the last race in Bahrain, was third, 0.256 seconds off his Ferrari teammate's pace.

Hamilton and championship-leading teammate Valtteri Bottas, who was fifth, set their fastest laps on the grippier soft tyre with Vettel and Leclerc setting their best efforts on the less sticky but more durable medium compound rubber.

Max Verstappen, who botched his chances of victory in China with scrappy attempts to overtake Hamilton and Vettel last year, was fourth quickest in his Honda-powered Red Bull.

Daniel Ricciardo was sixth for Renault ahead of Frenchman Pierre Gasly in the second Red Bull and Russian Daniil Kvyat in the Toro Rosso.

Lance Stroll was ninth for Racing Point, ahead of Romain Grosjean in 10th and team-mate Kevin Magnussen in 11th.

Sunday's Chinese Grand Prix will be the 1000th Formula One world championship race.

Hamilton, who trails teammate Bottas by one point in the standings with the Mercedes pair finishing one-two in each of the season's two races so far, is the most successful driver around the 5.4-km circuit.

But the Briton can expect a stiff challenge in his bid for a sixth triumph with Ferrari tipped as favourites following their dominant performance in Bahrain and Red Bull, winners last year with Ricciardo, also an outside chance.