Home » Racing » ‘I just want to be back here and never leave’: Ricciardo returns to front row

Daniel Ricciardo dared to dream after the Australian secured his return to the Formula One front row with McLaren at Monza on Saturday.

Second place on the Italian Grand Prix grid was Ricciardo’s best qualifying performance since he took pole position in Mexico for Red Bull in 2018 with then teammate Max Verstappen alongside.

Verstappen, now leading the world championship, will be on pole this time.

McLaren have not won a race since 2012 — a wait of more than 3200 days and counting — but came close at Monza last year when Carlos Sainz, now at Ferrari, finished second to AlphaTauri’s surprise winner Pierre Gasly.

“I’ll probably dream a little bit about it tonight, but I’m ready to make that a reality for sure,” Ricciardo said of the possibility of taking his first win since 2018.

“A few things might have to swing in our favour tomorrow, but we’ll certainly put ourselves in the fight, in the hunt. Very excited to get going with that and try to make some good stuff happen.”

Ricciardo had qualified fifth for the sprint race, and finished third on track but moved up to second for Sunday’s grid because winner Valtteri Bottas will start at the back due to engine penalties.

The 32-year-old had said after Friday qualifying for the sprint that he felt “internal rage” at being only 0.006 of a second behind teammate Lando Norris and 0.029 slower than Verstappen in third. 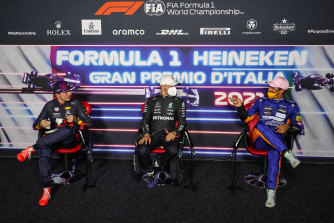 On Saturday, with Norris third on the grid for Sunday and seven-times world champion Lewis Hamilton fourth for Mercedes, he said he had “kept the room in one piece”.

“I used some of that today and I will use the rest of it tomorrow,” he laughed when reminded about the anger. “I’m hungry. It’s been a long time since I’ve been up in this position. I just want to be back here and never leave.”