Lewis Hamilton says he will support this weekend’s social media boycott and has called on the social media companies to do more to eradicate online hate.

The period of silence on social media platforms, initially announced by a coalition of English football’s largest governing bodies and organisations, will run from 3pm on Friday to 11:59pm on Monday, May 3, and is aimed to combat abuse and discrimination.

Hamilton has been a powerful leading voice in calling for an end to racism and has already labelled 2021 as a year for ‘action’ to help create a more tolerant and inclusive society.

Asked at the Portuguese GP by Sky Sports F1 if it was time for people to stand up against online hate, Hamilton said: “100 per cent, and I think I’m going to be supporting it this weekend also. There’s no reason not to.

“You’ve seen what’s happening around the world, you’ve seen a lot of the talk that happened last year, but this year is a year of action.

“The social media platforms haven’t done enough at the end. They have the capability of implementing change and making sure that there’s no grounds for that.” 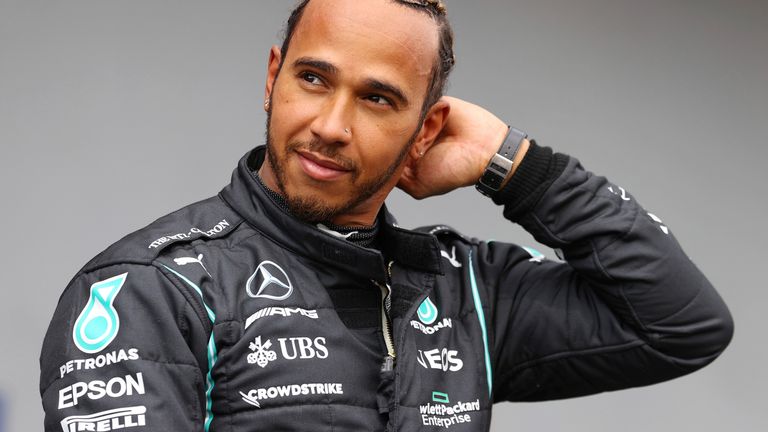 The seven-time F1 world champion said the groundswell of fan support against the ill-fated European Super League proposal in football last week had shown what was possible when people unite so powerfully.

“What’s really been interesting is seeing what happened with the Super League just recently,” said Hamilton.

“You see all those people come together and rally against it. Imagine all those fans did the same thing against racism? Just imagine the change that we’d be able to do. It’s amazing what we can do when we’re united and so I’m really proud to see that there are multiple organisations that are supporting it this weekend and I hope that it sparks change, and so I’m going to support it. I’m not sure why Formula 1 aren’t, but I will.”

One of the world’s most successful and renowned athletes, Hamilton has a huge global social media following with 22m followers on Instagram alone.

The Mercedes driver said he has experienced online hate in the past.

“I was subject to abuse a long, long time ago at a time when I was younger when I was reading social media and, like many people do, trying to engage with people and reading,” he said.

“But there was a period of time where I had to understand you can’t read, firstly, every comment that’s on there and you can’t take it personally. If you let those things get to you then they can really ruin your day.

“So I took a period of time where I stepped a lot back from it and generally don’t go searching for that stuff or for validation. I’ve got amazing support from many fans that follow me and I’m super grateful for the support I do get. I do believe that social media companies need to do more. There are algorithms, they are able to take steps in helping create an anti-racist society.

“That’s what we’ve really got to be pushing towards.”

Sky Sports is supporting the boycott of social media by football and the wider sporting community this weekend.

Sky Sports stands with our football, cricket and other sport partners to urge social media companies to do more to eradicate online hate and ensure social media can be a place for sports fans to discuss, debate and consume the best sporting action without discrimination and abuse. Sky’s partnership with Kick It Out is based on fighting discrimination and championing inclusion, and our action this weekend demonstrates our clear and enduring commitment to the cause.

Sky Sports TV channels, website (skysports.com) and two apps (Sky Sports app and Sky Sports Scores app) will remain the go-to destinations for sports fans to keep up to date with all the action, scores and sporting news throughout this exciting weekend of sport.