Home » Racing » F1 » 'He knew what would happen!' – Lewis Hamilton hits back at Verstappen over crash 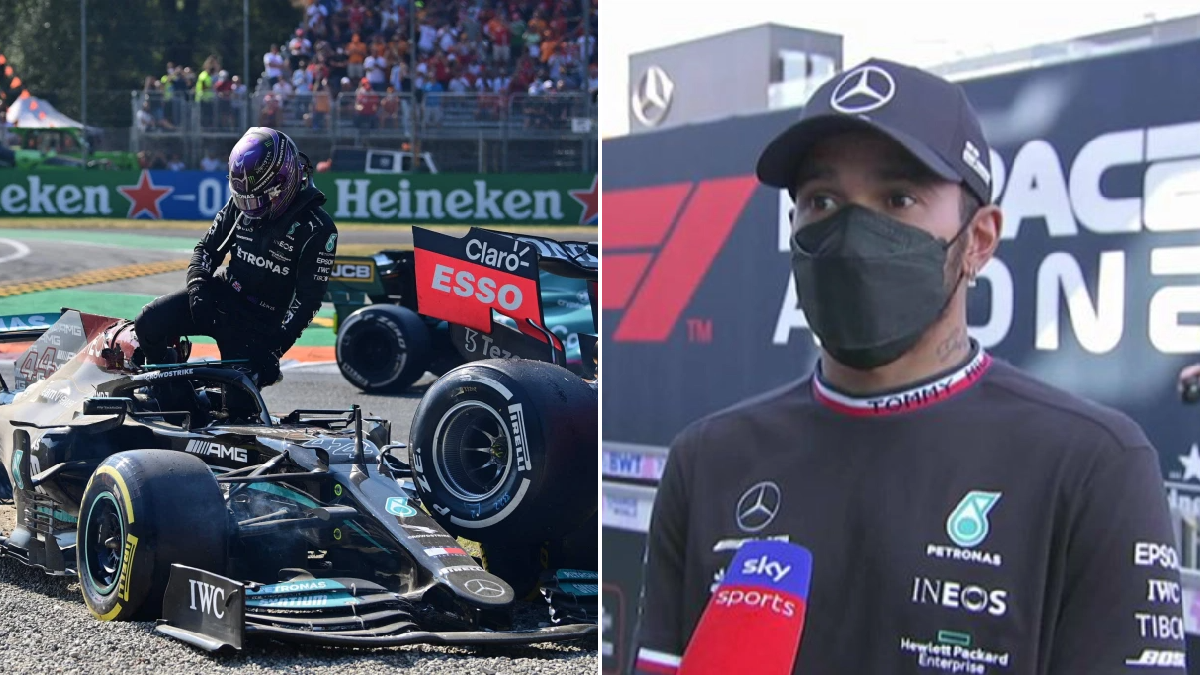 Lewis Hamilton has rubbished Max Verstappen’s claim that he should have given him more space after their crash at the Italian Grand Prix and says his F1 rival needs to learn when to give way.

The two title contenders collided on lap 26 of Sunday’s race after the Brit emerged from the pit lane narrowly ahead of Verstappen, with the Dutchman hitting the sausage kerb on turn two and flipping up onto the Mercedes car.

Hamilton only avoided serious injury thanks to the halo device and Verstappen walked away from the crash saying, ‘That’s what you get when you don’t leave the space.’

But the seven-time champion was critical of Verstappen afterwards and felt the younger driver was responsible for the collision, saying his Red Bull rival should have backed off just as Hamilton did in the first lap of the race.

Asked if the two situations were similar and Verstappen could have given way just as Hamilton did, the 36-year-old told Sky Sports: ‘Absolutely. It’s exactly the same scenario that happened in turn four [in lap one] where I went round the outside, I was in exactly the same position, but I gave way. And that’s racing.

‘He just did not want to give way today and he knew when he was going into turn two what was going to happen. He knew that he was going over the kerb but he still did it. So we’ll speak to the stewards and see, but I don’t really know what else to say.’

Hamilton continued: ‘Just from what I remember I was racing as hard as I could, finally got past Lando [Norris], I was in the lead time-wise so they pitted me, pit stop was obviously slow, lost a couple of seconds.

‘Came out, I saw that Daniel [Ricciardo] came past, Max was coming, I made sure I left a car’s width on the outside for him, I went into turn one and I was ahead and I was ahead going into turn two and then all of a sudden he was on top of me.’

Verstappen did not agree with that assessment, though, saying: ‘Well I don’t think you can judge them exactly the same, because he just kept on squeezing and squeezing while I was a lot alongside him. You need two people to work together to make a corner and we were fighting for position. Unfortunately we touched.’

Asked if he was feeling alright following the crash, Hamilton added: ‘Yeah, a little bit stiff, little bit sore on my neck to be honest because it [the car] landed on my head. But I’ll be OK.’