Supercars fans can buckle in for a Bathurst bonanza next year as the big banger V8 series will deliver a double dose of thrills from Mount Panorama.

The 2021 championship will grid up at Bathurst for the opening round in late February as a curtain-raiser for the main course, the Bathurst 1000, which will be run in its traditional October timeslot.

Supercars drivers, around those two events at the spiritual shrine of Australian motorsport, will race each other at 10 other rounds in every state and territory as well as over the ditch in New Zealand. 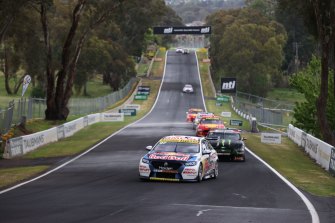 The seasonal finale will take place on the strip at the Gold Coast in December – a signature sign-off for the country's premiership motorsport category.

Racing will return to Victoria with a four day round staged at Albert Park as the main support act to the Australian Formula One Grand Prix in March. There will be a second event in Victoria's rural heartland at the Winton Raceway near Benalla in the final weekend of May.

But the traditional Bathurst curtain-raiser, the Sandown 500, is off the itinerary. Supercars officials say that it will occupy a key spot as a reserve venue throughout the season.

"Sandown plays a critical role as a flex option for the category with multiple bookings through the year should other events be cancelled," a statement read.

Of the 12 events between February and December, six will be "SuperSprint" meetings run over the two day formats used in 2020, when COVID-19 restrictions were highest, while four others will be staged over three days. Only the Melbourne Grand Prix meeting and Bathurst 1000 will stretch over four days.

"It is important to us to ensure the 2021 calendar features as much certainty for fans as we can provide given the current COVID-19 restrictions in each state and territory," Supercars CEO Sean Seamer said.

"We're thrilled that next year we can deliver two events at Mount Panorama, including the season opener in February.

"We are still working with all government partners on fan limits for each event, but we are confident of strong crowd numbers across Australia and New Zealand, in line with the current loosening of COVID-19 restrictions."

There is a planned six-week break around the Tokyo Olympics, before Supercars returns under lights at Sydney Motorsport Park.

"We think having three different event formats used in 2021 will build on what we've learned about our racing this year, so fans can look forward to thrilling weekends every time we race," Seamer added.

The Newcastle event will not feature on the 2021 calendar either, but it will be the opening round of the 2022 season.

Teams will begin preparations for the 2021 Championship with pre-season testing to take place at Sydney Motorsport Park on Sunday, 14 February.

Series organisers are reviewing general admission, grandstand and corporate ticketing options for the season opening Mount Panorama 500 and expect to know how many fans might be able to attend later this month.