Remy Gardner has suffered a concussion and Indonesian rider Dimas Ekky Pratama is lucky to have avoided serious injury after the Australian crashed in the opening lap of the Moto2 in Spain.

Gardner, the son of 1987 motorcycle world champion Wayne, was third in a bunched field when he high-sided coming out of the first turn in Jerez on Sunday. 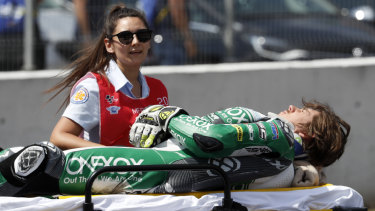 Moto2 rider Remy Gardner is carried off on a stretcher after a crash in Spain.Credit:AP

The 21-year-old was thrown from his bike, which hit Spanish rider Alex Marquez, whose own bike hit Gardner.

The chasing pack somehow managed to avoid the pair but Pratama was knocked off his bike by the Australian.

The red flags came out and medical teams rushed to the track where Gardner was sitting and both he and Pratama were stretchered away.

Bezzechi rode to the pits while Marquez's team pushed his bike away.

Gardner was declared unfit to race due to a concussion, while Pratama was miraculously uninjured.

The race was restarted as a shorter, 15-lap event with Italian Lorenzo Baldassarri winning and Spaniards Jorge Navarro and Augusto Fernandez completing the podium.

Bezzechi finished finished 22nd while Marquez was two places behind him.

The crash is a big setback for Gardner, who was sitting fourth in the Moto2 overall standings and had qualified for the Spanish race in fourth.

The Australian claimed his maiden podium finish by coming second in Argentina last month and was just 0.002s off the podium in the opening round in Qatar in March.

Meanwhile, in the MotoGP event, world champion Marc Marquez swept back to the top of the standings by a single point after running away with his home Spanish Grand Prix.

The Honda rider led from the first corner to chequered flag, heading a Spanish one-two-three with Suzuki's Alex Rins 1.654s behind as runner-up and Maverick Vinales third for Yamaha.

Australian Jack Miller did not finish after he crashed his Pramac Ducati following a collision with Aprilia's Spaniard Aleix Espargaro while trying to go through on the inside at turn 13. 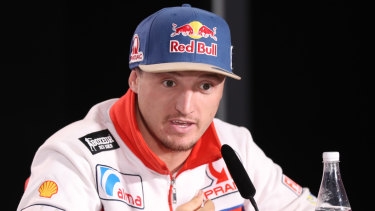 Marquez, who crashed while leading in the previous round in Texas, started third on the grid on Sunday and now has 70 points after his second win of the campaign.

Rins is on 69 thanks to his second successive podium, with Andrea Dovizioso dropping from the overall lead to third on 67 after finishing fourth on his works Ducati.

The Italian was right on the tail of Vinales in the closing stages but ran out of time to get past.

"It was more difficult mentally than physically. After the mistake in Austin it is not easy to race here and lead the race from the beginning to the end," Marquez said.

"But I am convinced about my performance and of the bike, I'm feeling really good.

"It was a bit hard to know why we crashed in Austin so today, this weekend, I felt really good, really smooth, riding like I want."

Italian Valentino Rossi took sixth place after starting 13th. The 40-year-old great tumbled from second to fourth in the championship on 61 points after four rounds of the season.

French 20-year-old Fabio Quartararo, who had started as the youngest ever rider on pole position, had looked set for the podium but his Petronas Yamaha slowed on lap 14 after getting stuck in third gear.

The distraught rookie headed back to the garage and retired.

Aprilia's Andrea Iannone, who crashed in Saturday practice, was ruled unfit to start after a morning medical.

The next race is the French Grand Prix at Le Mans on May 19.