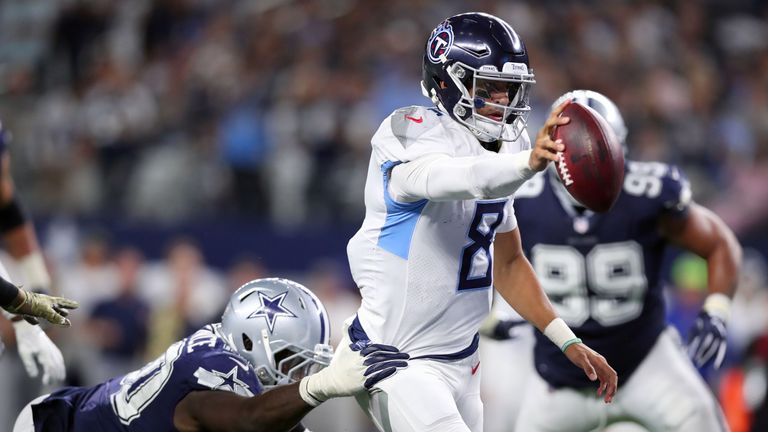 Marcus Mariota threw two touchdowns passes and rushed for another to lead the Tennessee Titans to a 28-14 road victory over the Dallas Cowboys on Monday Night Football.

Mariota completed 21 of 29 passes for 240 yards and tossed scoring strikes to running back Dion Lewis and tight end Jonnu Smith as well as running into the endzone himself, from nine yards out in the fourth quarter, to snap a three-game losing streak for the Titans (4-4).

Dallas quarterback Dak Prescott was 21 of 31 for 243 yards, also throwing two touchdowns, although he was also intercepted in the endzone when the Cowboys had the chance to go 14-0 in the first quarter – that set up a Derrick Henry score to tie the game up at 7-7 – and fumbled in the third, allowing Tennessee to take the lead.

The Cowboys had earlier gone in front thanks to Amari Cooper’s first touchdown for the team. He caught five passes for 58 yards, including the four-yard score, on his Dallas debut.

It stayed level, at 14-14 heading into half-time, after further touchdowns for Lewis for the Titans and Allen Hurns for the Cowboys, but it was Tennessee who took control of the contest after the interval to inflict a third defeat in four on Dallas (3-5).