The Baltimore Ravens have returned more positive tests for COVID-19.

An ESPN report indicated the Ravens experienced additional additional positive tests for the coronavirus on Wednesday, which would mark a fourth day with an outbreak for the team.

The Ravens have already placed a total of nine players on the COVID-19/reserve list this week, and they have had several staff members also test positive. The team announced Wednesday that it had disciplined a coach for not reporting COVID-19 symptoms, and for not consistently wearing a mask and tracker.

The NFL has already rescheduled the Ravens' Thanksgiving Day clash against AFC North rival Pittsburgh Steelers in Pittsburgh for Sunday at 1:15 p.m. ET in an effort to conduct more testing and contact tracing. 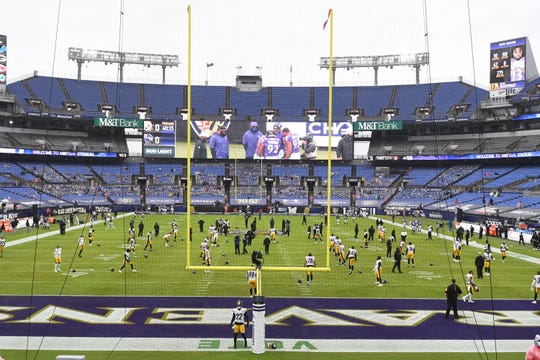 An overhead look of M&T Bank Stadium, home of the Baltimore Ravens, before their game against the Pittsburgh Steelers. (Photo: Mitchell Layton, USA TODAY Sports)

The Ravens' string of positive tests started shortly after the conclusion of their 30-24 overtime loss against the Titans when it was discovered running backs Mark Ingram and J.K. Dobbins had tested positive.