COLUMBUS, Ohio — The Good Vols were just about as good as any team remaining in this tournament can be Sunday – swarming on defense, rebounding, running, passing for a good shot and then passing again for a great shot.

That Tennessee team dismantled Iowa in 15 minutes and 38 seconds of basketball near-perfection at Nationwide Arena, building a 44-19 lead and carving out what looked like a smooth path to the Sweet 16.

The Bad Vols nearly blew it. Nearly made dubious NCAA Tournament history. Nearly made any previous Rick Barnes setback in this event look like nothing. South Region No. 10 seed Iowa outscored the No. 2 seed Vols 39-17 over the next 16 minutes and 59 seconds, getting within three, and then in the final moments of regulation – moments of furious, pressure-packed basketball – the Hawkeyes tied it and got it to overtime.

The Good Vols returned to save the day. Grant William’s Vols, specifically. He dominated the extra session to drag UT to the South regional semifinals with an 83-77 escape and to help UT avoid tying the NCAA Tournament record for largest blown lead in a loss. The Vols (31-5) will play Purdue (25-9) on Thursday in Louisville.

So, say it again: Every win in this thing is huge, no matter how it comes about. And this one gets the Vols to the Sweet 16 for just the eighth time in school history, one win from their second Elite Eight, two wins from their first Final Four. Oh, and Iowa (23-12) deserves a fair share of the credit for making that a game with huge shots and the same sticky zone defense that turned its first-round win over Cincinnati.

But my goodness is this Tennessee team prone to astounding swings. This was last week’s SEC semifinals win over Kentucky, followed by a title-game blowout loss to Auburn, all wrapped up in one game. 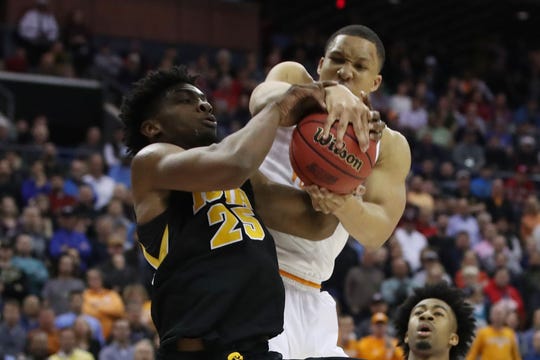 Tennessee Volunteers forward Grant Williams (2) steals the ball from Iowa Hawkeyes forward Tyler Cook (25) in the second half in the second round of the 2019 NCAA Tournament at Nationwide Arena. (Photo: Kevin Jairaj / USA TODAY Sports)

Good thing the Vols have Williams – who had no choice but to take over with Barnes choosing to sit Admiral Schofield for the final offensive possession of regulation and all of overtime. Williams had six of his 19 points in the extra session, passed out of a double team for a Jordan Bone 3-pointer, and had a crucial strip of Iowa star Tyler Cook with the Vols up 80-75 and 63 seconds left on the clock.

A CBS national audience saw it all Sunday afternoon from the Vols – the heights of their goodness, the depths of their stretches of sloppiness and the mental toughness of their best player.