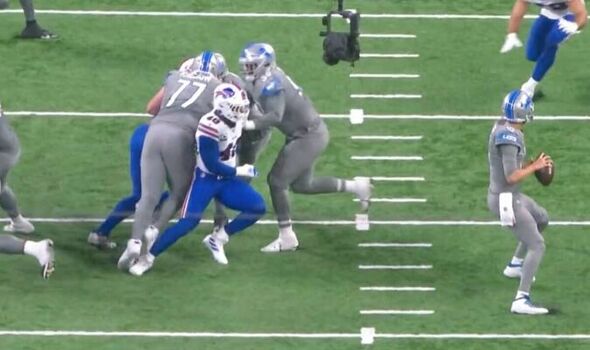 Detroit Lions’ playing surface at Ford Field has come under criticism once again with their controversial turf potentially causing another injury – one that could turn the tide of the Buffalo Bills’ Super Bowl hopes. In the second quarter of the game, Bills’ best pass-rusher Von Miller was rolled up on and went down clutching his knee. He would have to be carted off the field, reporters and doctors both stating that there’s fears that Miller may have ruptured his ACL – an injury that would rule him out for the season.

The Lions are one of six teams in the NFL who’s stadium uses slit firm turf – a style of artificial turf which could be banned after this season, with the NFLPA calling for it to be abolished due to player safety. A number of players have suffered season-ending injuries on the turf, which is said to be a least favourite amongst the majoirty of players in the league.

The New York Giants and New York Jets both use the turf at their stadium, as well as Minnesota Vikings, New Orleans Saints, Indianapolis Colts and Cincinnati Bengals, who will all be forced to move to a different style of turf or grass.

Players have continuously called upon the NFL to take action, and after Miller’s injury, fans have taken to social media to call for the immediate change. One said: “Turf has to go in the NFL” as another said: “That turf in Detroit, just get rid of it”, and another added: “How many players have to get severe injuries on these field turf surfaces before the NFL admits there is a problem.”

Miller has had a strong first season for the Bills after signing a multi-year contract, in the hopes to compete with Josh Allen at quarterback being favoured to lead the team to the Super Bowl.

The legendary pass-rusher joined the Los Angeles Rams last season, along with Odell Beckham Jr, who helped vault them to winning the championship.

Miller ranks in the top 10 of sacks this season with eight, and continues to play at an elite level. His loss would be a huge hole to make up for in the Bills defence, who have struggled as of late.

The Lions meanwhile, are on a three-game winning streak whilst currently leading the Bills in the fourth quarter in what has been an almighty turnaround by the team after a dismal start.

The Lions-Bills will be the first of three games on Thanksgiving Thursday, with the Dallas Cowboys to face their rival New York Giants before the New England Patriots travel to Minnesota to face the Vikings.