A day after groups from several NFL teams released statements through the NFL Players Association announcing their intention of boycotting voluntary workout programs, the league has informed teams of the implementation of guidelines allowing for a hybrid setup that will feature both virtual and in-person sessions this spring and summer.

Offseason programs are set to kick off April 19. In the memo issued to teams, the league announced that this phase of the calendar will consist of 100% virtual participation with no on-field action. During this time, players can still satisfy requirements to earn workout bonuses in their contracts and will be eligible to earn the daily $275 offseason program per diem, which is required by the collective bargaining agreement.

MORE: BYU quarterback Zach Wilson is the buzz of the NFL draft. But does his potential warrant the hype? 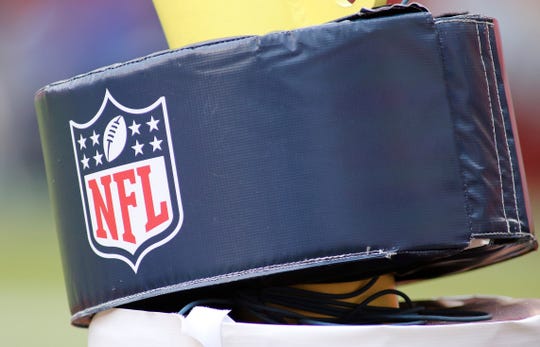 A close up an NFL football logo on a goalpost during an NFL football game between the Los Angeles Rams and Washington Football Team, Sunday, Oct. 11, 2020 in Landover, Md. (Photo: Daniel Kucin Jr., AP)

The NFL and its teams intend to have vaccines available to all players but will not make them mandatory, although they will be encouraged.

Phase 2 of the offseason will run from May 17-21. During that window, teams can hold rookie minicamps and on-field drills for their entire team. Meetings will continue to take place virtually.

From there, the offseason will progress to Phase 3, which runs from May 24 to June 18 and includes mandatory minicamp. As with the first two phases, meetings will take place virtually, and teams will hold in-person, non-contact practices.

One of the NFLPA's concerns about the setup of the offseason program involved COVID-19 testing protocols. Originally, offseason testing had been relaxed from the daily requirements of the regular season. Players rehabbing at facilities have been tested once every five days, and those using the weight rooms have been tested every other day.

But once Phase 3 of the offseason program begins, testing will return to the daily regimen.

Stressing the importance of the league’s continued efforts to ensure the health and safety of its players during the ongoing pandemic, the NFLPA had urged NFL officials to stage 100% virtual offseason programs as it did last year. The NFLPA encouraged players to opt against attending the voluntary offseason program, and on Tuesday, the players of the Denver Broncos, Seattle Seahawks and Tampa Bay Buccaneers announced they would collectively abstain from taking part. On Wednesday, the NFLPA relayed a similar statement from Detroit Lions players as well as one from New England Patriots players, saying “many” of the latter's members planned on opting against taking part in the organized team activities.

Later Wednesday afternoon, the league sent the memo to teams announcing the modified guidelines for the offseason program. It’s unclear if this alteration to the program satisfies the wishes of the players' union, but it’s expected that the league and NFLPA will continue to engage in dialogue about the offseason.

Last season, the entire offseason program took place virtually, and players were barred from working out at team headquarters. A number of players formed their own group workouts at area parks and high schools, but the NFL this year wanted to ensure that they had access to their team facilities for workouts and on-field sessions.

One question about the NFLPA’s encouragement to boycott OTAs involved the earning potential of players whose contracts featured workout bonuses. Of the 2,016 players under contract, only 203 have deals with bonuses tied to workout attendance, according to the NFLPA. But this setup will allow them to earn those bonuses rather than forfeiting them if they decided not to attend.