A 14-year-old Christian Scotland-Williamson couldn’t quite understand why there were teenagers two years older than him struggling with depression amid their pursuit of a career in professional football.

And why would he understand? He was only 14, growing up within a society far less tuned into the mental pressures within sport, and life in general, than it is in 2020.

While young aspiring footballers contended with an overpowering dream to succeed in elite academies, Scotland-Williamson admits he had “always looked at that from the outside in”.

It wasn’t until the beginning of his rugby career that the then-Worcester Warriors lock was personally introduced to the psychological side of his industry. He was starting to understand.

Now, having spent three years in professional rugby and started a once-unlikely looking career with the Pittsburgh Steelers in the NFL, he does understand. “I got thrown in the deep end, turning professional in my last year of university at 20-years-old and that’s when those realities affected me and I became involved in that.” he told Sky Sports.

“I was never really planning on that professional route so I had those normal life pressures of ‘do well in school, try and get a good job, get a degree etc’.

“In my first year I had to deal with a big injury and that’s what started my mental development because I really had to put myself back together physically and mentally and it took a lot of effort to get over that hurdle. That’s when I first started working with a sports psychologist and then I’ve really been able to reap the benefits of that.”

Scotland-Williams’ career path always promised obstacles, he knew that. The magnitude of the challenge partly inspired his decision to leave rugby in 2017 and chase a career in the NFL.

On May 1, 2018 he signed to the Steelers practice squad after being rewarded for months of learning technique, X’s and O’s and prepping physically on the International Player Pathway program.

On the surface it was a landmark moment in his sporting career, but one that entailed moving away from family, establishing himself in a new environment all over again, and facing fresh, even daunting, expectations.

As far as mental and psychological support was concerned, Scotland-Williamson would find that the Steelers were equipped to assist with all of the above.

“I’d say from my personal experience it’s been amazing,” he said. “I’ve been working with a sports psychologist for pretty much the whole time I’ve been here and I really only started working with one back when I was playing rugby so I’m probably six years deep into that mental development.

“That’s one thing that sets this organisation apart because they really want to make sure that everything around your life that goes outside what you do in the building and football is the most settled it can be so you can do your job at the very highest level.”

The 26-year-old is heading into season three in the NFL, but the 3,713 miles separating London and Pittsburgh will have never felt so far.

It’s been a “rough” few weeks for the tight end, who has been forced to watch from a distance while mother Hazel and father Guy have both suffered with coronavirus back in the UK.

But again, the Steelers have been there to help, just as they have been ever since his arrival.

“For me when I was struggling with a few things like the distance and my parents being ill a couple of weeks ago the Steelers support network was really there for me,” he added.

“Because they know the stress they put us under in the building and what the job requires to execute at a high level means that you have to have all your ducks in a row outside of the building and in your personal life. They’ve really been great in terms of making those resources available.”

The NFL and NFLPA announced a new mental health initiative in May 2019 requiring every team in the league to hire a mental health professional to work at its facility.

A mental health and wellness committee was also formed in view developing educational programs on mental heath for players, teams and player relatives. The committee set out to work with national and local mental health and suicide prevention organisations to promote awareness and help remove the stigma associated with mental health in sport.

The Steelers and the NFL as a whole have become increasingly vigilant to the importance of mental health and wellbeing.

Scotland-Williamson added: “In terms of being able to see what the awareness is like from an NFL perspective, there’s a lot of structure in terms of your rookie year and having rookie development meetings about managing your personal lives so they don’t spill over onto the field and understanding that you can reach out to people.

“I think the biggest thing that I’ve realised is that the whole mask of masculinity doesn’t need to be there. You can still be a strong, powerful man but accept you struggle with some things or there might be days that you feel down and there’s nothing wrong with that.

“Because it does happen, especially with the amount of pressure you’re under on a daily basis.” 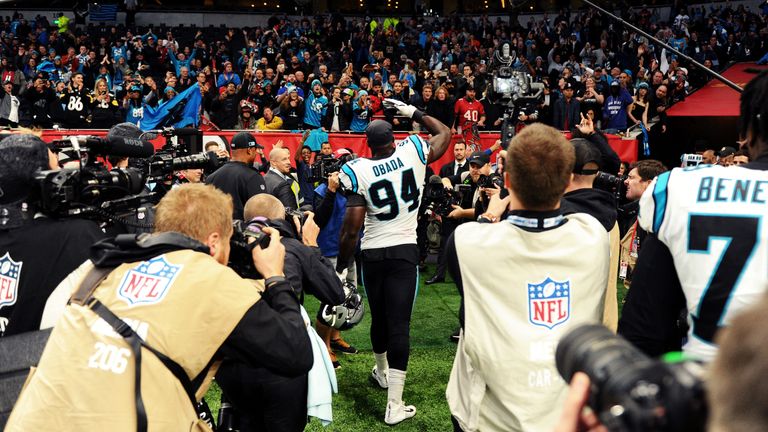 Former Carolina Panthers wide receiver Steve Smith Sr. has spoken openly in the past about his battle with depression, describing how he felt ‘trapped, inferior and alone’ despite his success on the field. Iconic American swimmer Michael Phelps, who won an all-time Olympic record 23 gold medals in his career, has admitted he considered suicide after the 2012 Olympics having struggled with depression.

Scotland-Williamson believes the growing honesty surrounding mental health in professional sport can be vital in helping anybody who may find themselves dealing with negative thoughts.

“As athletes you can use that platform for good really, because I speak to a few guys who are with the NFL Academy back home and had the chance to talk to them about the mental side because I’ve been through it,” he said.

“I’ve been through a down period where I was finding my feet as a professional and as a man. At 20, 21-years-old you think you’re ready to conquer the world, but if you get rocked a bit you don’t really know who you are in a concrete fashion.

“That’s what all the mental work allowed me to cement for myself. I always make sure say, especially to young kids 17 and below, that it’s okay to feel down sometimes, it’s okay to struggle sometimes. I think it’s noticing that from rugby and football, people are much more open with expressing that now.”

“Especially with the nature of the NFL, guys are playing from five, six-years-old,” said Scotland-Williamson. “You’re a top recruit in high school, a top recruit in college, top prospect coming out so you’ve always been the best.

“Suddenly you get thrown into a shark pit where everyone has that background and everyone is elite. Somebody said to me the other day ‘even the worst player on a roster is world class’.

“That’s the reality we live in and every year there is someone trying to take your place.”

Besides the intensity of nationwide competition posing as a challenge in itself, it’s not uncommon for athletes to find adapting to life beyond sport difficult.

“You work from five to 22, 23-years-old and play a few years in the league, then suddenly you’ve got the next 50 years of your life to live when all you’ve focused on is that one thing,” added Scotland-Williamson.

“Some people do make it to that level, some don’t, it’s about being able to understand and manage those levels of expectation. It’s being able to keep that perspective that there is a life beyond your current profession and pursuit.”

The NFL recognised addressed this in the new collective bargaining agreement, which will see the establishment of a new network of hospitals provide former players with no-cost mental health services, along with screenings and orthopedic care. It also ensures that the pensions of former players will increase by 50 percent.

He continued: “Ultimately, you’re a person as well and that’s a thing people need to have balance with as well, because it’s easy to lose yourself in the system where you think your whole life is on your win or loss column.

“But you have to remember that it extends beyond that, otherwise when it’s taken away, where else do you have to go?”