It was a good night for Florida Panthers fans as they kept their place at the top of the NHL Atlantic Division with a 5-2 win over the Vancouver Canucks, but it appeared to be an even better night for rapper Kodak Black.

The American rapper is a well known Panthers fan and is regularly seen attending games at the BB&T Center, but fans and presenters were stunned as he was seen 'having sex' during the game.

A fan captured a bizarre video of the rapper making full use of his private box, as he was suspiciously located behind a woman who was positioned in a rather raunchy stance.

Despite the rapper watching on from a private area of the arena, his antics were a lot more public than he may have realised.

The woman in attendance with the rapper was seen bent over as the pair engaged in a 'sexual activity' and the video was captured by a Panthers season ticket holder who uploaded the video to Twitter.

The video was captioned with: "I think Kodak found something better to do at the Panthers game."

However, in response to the video that stunned NHL and Kodak fans combined, a close-up angle was posted to clarify the rappers actions, as it was claimed that they were 'just twerking'. The response said: "Calm down she was just twerking everyone LOL."

But fans have remained suspicious based on how the rapper was standing, as one Twitter user said: "Why is he standing like that?"

Another added: "Inconclusive imo", and there are a lot more fans that think that there is more to it than meets the eye.

It wasn't just fans that were stunned by the explicit images though, as even the Bally Sports team that were covering the game were seen looking over into the rappers not so private box.

The punditry team were pictured looking over in amazement as the rapper and his associate, but tired to remain professional and concentrate on what was an exhilarating game.

The Panthers remain top of their division and are even setting the pace for the whole of the Eastern conference, leaving fans wondering just how hard the rapper will celebrate should they win the Stanley Cup for the first time in their history. 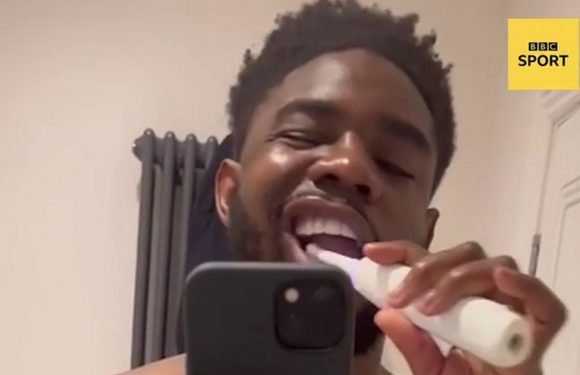