Mark Cuban For President was trending on Twitter Tuesday afternoon.

In a series of tweets, the owner of the NBA’s Dallas Mavericks blasted Democratic and Republican leadership for not getting a coronavirus (COVID-19) stimulus bill passed.

He used NSFW language, imploring senators to “Do your (expletive) job.”

He was angry. He wants relief – and now – for working folks and small-business owners in difficult, if not, desperate financial situations.

Cuban seeks a plan that ensures workers of small- and medium-sized businesses and independent contractors will get “the comfort that they will continue to have a job and get paid,” he told USA TODAY Sports in an email interview. 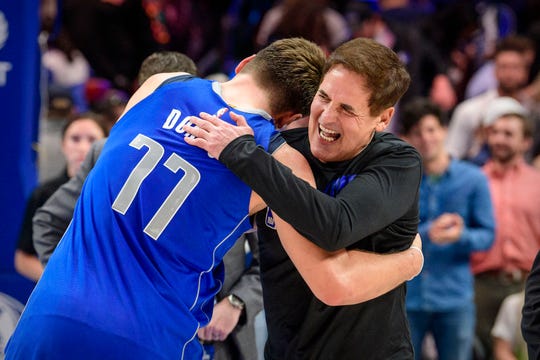 I asked Cuban what is motivating him during this time. His answers were honest, earnest, reflective and hopeful.

“It’s the right thing to do,” Cuban wrote. “Healthcare workers are putting their lives on the line to help if not save us, how can we not help?”

Cuban is outspoken and loud, sometimes to his detriment, having been fined nearly $3 million by the NBA.

Right now, Cuban is outspoken and loud, to the benefit of many on the receiving end of his ideas, generosity, understanding, compassion and drive.

He is the NBA’s most vocal owner during the COVID-19 pandemic. As soon as the NBA announced it had suspended its season on March 11, Cuban was on TV as the Mavericks played the Denver Nuggets (the last game of the season so far), saying, “It’s not about the team. It’s about the country and life in general. We’ve got the pieces in place. I’m concerned now that we’re not playing games, what about all the people who work here (at the arena) on an hourly basis? We’ll put together a program for them.”

By March 13, the Mavericks announced, “The organization, along with American Airlines Center leadership, is currently making arrangements to ensure that scheduled event staff will receive payment for the six home games that were to take place during the 30-day NBA hiatus."

But Cuban has done more than that, too, offering financial and knowledge-based resources.

He conducted a Q&A for small-business owners on LinkedIn, pushing for medical personnel to get the necessary personal protective equipment, delivered meals and refreshments to critical care teams at Parkland Hospital in Dallas and paid for meals for health workers at drive-up COVID-19 testing sites. Cuban, Luka Doncic, Dwight Powell and the Dallas Mavericks Foundation donated $500,000 to the University of Texas Southwestern Medical Center and Parkland Hospital and “funds will be allocated to support childcare for healthcare workers on the front lines of the COVID-19,” according to a news release.

Cuban is thinking large and small. He is against stock buybacks for companies that receive bailouts and he wants conditions, such as 100% employee retention for companies that get bailout money. When Cuban saw a tweet suggesting people tip cashiers at grocery stores, Cuban responded, “I’m in.”

He has taken a special interest in helping small businesses and wants a stimulus package even if it’s less than perfect.

“When you make decisions using imperfect information, you make imperfect decisions,” he wrote. “No matter what we decide it will have problems.

“That said, if it were up to me, I would have the Treasury/Federal Reserve end all overdrafts for small and medium-size businesses and independent contractors. In other words, they could write the checks for their payroll, utilities, rent, lunch, whatever and those checks would not bounce, AS LONG AS they retained their employees and rehired those they have laid off since Feb. 1

“This will allow them to operate the way they always have without the delays and uncertainty of trying to get SBA or other emergency loans. It will also give employees the comfort that they will continue to have a job and get paid.

“I’m also all for the $1,200 checks that the Feds are looking at distributing. That gives people some short-term comfort and control.”

And it’s also personal for Cuban.

“We are the most entrepreneurial country in the world," he wrote. "There is no place I would rather live. My grandparents left the country they were born in because of fear of being slaughtered and came here, lived through the Great Depression and made it work with nothing.

“My father lived through the Depression as a child and fought in two wars and did back-breaking work six long days a week because he believed so strongly in our country. Each of us as Americans has a similar story. Who we are today is built on the backs of all that came before us. They found a way to make it work and so will we. That is who we are. We are Americans.”