LeBron James was left to rue a missed opportunity after missing a three-point shot that would have earned the Los Angeles Lakers their first win of the NBA season.

James produced a 32-point, 14-assist performance against the San Antonio Spurs and nailed a three-pointer with 2.9 seconds left in regulation to send the game into overtime.

With a minute left in the extra session, the Lakers led by six but a 7-0 Spurs win and two crucial missed free throws from James allowed San Antonio to escape the Staples Center with a 143-142 win.

With the Lakers trailing in the dying seconds of overtime, James hoisted a three-pointer to win the game but his effort cannoned off the rim leaving the Lakers without a win after three games of the new season.

Speaking in the locker room after the loss, James said: “We had our chances. We were up six with less than a minute to go. But we couldn’t get a stop. I missed two free throws which is unacceptable. Then they made a shot and I missed a shot.”

Defeat marked the first time since James’ rookie season in 2003 that his team have lost their opening three games. Nevertheless, James remained realistic and positive as he spoke to the media. 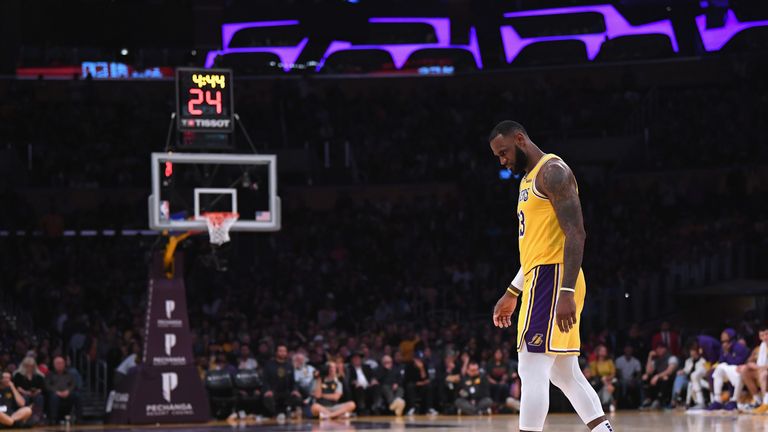 “I know what I’ve got myself into”, he said. “It’s a process. I get it. We’ll be fine. I didn’t come here thinking we’d be a blazing storm right out of the gate. It’s frustrating not to get the win.

“We’re going to continue to get better. I like the direction we’re going in. It’s not resulting in wins right now but it’s such a long process.”

Asked if he was pleased with the vigour and enthusiasm shown by his young Lakers team-mates throughout the game, James laughed and said: “They should be able to play the whole game, and overtime, and double and triple overtime and not get tired! I was 18 when I first got in the league, I could play four games in a row and not get tired.”