LeBron James was 27 years old when Trayvon Martin, an unarmed Black teenager who was wearing a hoodie when he was shot and killed on Feb. 26, 2012 by George Zimmerman, a neighborhood watch volunteer.

James thought about it – 10 years earlier he could’ve been Martin, who was 17 years old. James also considered his two sons, who in 10 years from that point could be in Martin’s shoes – teens wearing hoodies walking through the neighborhood.

The moment resonated with the NBA superstar.

Martin’s death impacted him in another way, too. It helped James find, refine and then define his voice on social and racial issues.

"From that point on, I knew that my voice and my platform had to be used for more than just sports," James told CNN in 2018.

Shortly after Martin’s death, James and his Miami teammates posted on Twitter a photo of themselves wearing hoodies, heads bowed in support of Martin.

Consider the time: Early in the life of Twitter, which was taking off as a platform, and before viral posts were commonplace.

LeBron James and his Miami Heat teammates wore hoodies in solidarity with the Trayvon Martin family following the unarmed teenager's death in 2012. (Photo: The Associated Press)

It was a major moment, introducing an era of NBA player activism that is more 1960s than 1990s and 2000s. It continues today.

James realized how he could use social media to communicate directly not just to his “followers” but to his community. It was empowering, and it emboldened him. It was a seminal point in the way James used his voice.

James got it. He discovered more than an opportunity. He had a responsibility to use his voice which has since grown larger, more powerful and more influential.

It has made him one of the most important athletes off the playing field.

James has an acute understanding of his platforms and has leveraged that massive reach to support causes, big and small, in which he believes.

He has 49.1 million followers on Twitter and 79.8 million followers on Instagram. James and his business partner Maverick Carter founded the athlete-empowerment site Uninterrupted, and his roundtable talk show his talk show "The Shop" is on HBO. He has a savvy PR team and access to traditional media such as TV and print/dot-com.

Early in the bubble last season – before Jacob Blake’s killing in Kenosha, Wisconsin – James spoke about Breonna Taylor, wanting justice for those responsible for her killing.

“It’s just who I’ve been for a while now,” James said. “Never afraid to speak about things that I was knowledgeable about, that I had insight on, and that I was up to speed on.”

He has backed up words with action, too.

His recent More Than A Vote campaign – aimed at driving voter registration and reducing voter suppression among minorities in the 2020 election cycle – probably wouldn’t have happened 10 ago.

RACE AND SPORTS IN AMERICA: 28 Black stories in 28 days 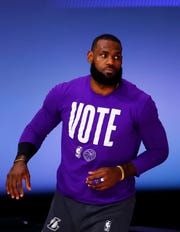 LeBron James led a More Than A Vote campaign during the 2020 presidential election cycle. The effort was aimed at helping turn sports and music venues in voting centers, partnering with teams and Live Nation. (Photo: Kevin C. Cox, Getty Images)

Today, James has the stature and resources to pull it off. More Than A Vote helped turn sports and music venues in voting centers, partnering with teams and Live Nation. It also linked with Lyft to provide free or subsidized rides to polling centers, and helped would-be voters create a game plan to ensure they followed through on voting.

He can contact former presidents and former first ladies, and he partnered with Michelle Obama’s When We All Vote to promote and provide access to early voting.

More Than A Vote was a success, especially its efforts in Georgia where a senate runoff tilted congressional power in favor of Democrats.

“Change isn't made by sitting on the sidelines,” James said in September during the 2020 playoffs. “That's one of our slogans, and we're very proud of that. Getting the people that want to join us, getting them gear and wearing the T-shirt and wearing the hats and wearing the hoodies, because when they go in their community, that's something that they can continue to enlighten, continue to educate, continue to make people empowered about this movement.”

Just this week, when former teammate Kendrick Perkins sent a tweet critical of the lack of Black front-office decision makers in the NBA, James responded with "1,000%!!!!"

No matter the topic, his voice is heard.

James also has the leverage to combine grassroots efforts with corporate America. Some of his philanthropic endeavors – which crossover into racial and social equality – wouldn’t be possible without that help.

He has created a school for at-risk students, college scholarships for his LeBron James Family Foundation students, transitional housing for families, food banks, job training and other educational resources in Akron, Ohio, where he was born. That financial support is necessary, and companies want to be a part of what James is doing.

Now 36 years old, James’ voice is established, and it appears he plans to use it long after he finishes playing basketball.