James Harden scored 38 points with 11 assists and Joe Harris added 22 as the short-handed Brooklyn Nets rallied from a 24-point deficit to earn a 128-124 road victory over the Phoenix Suns. 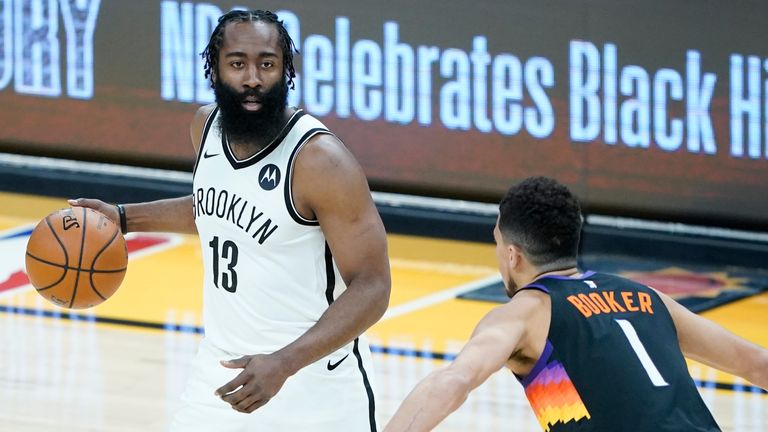 Jeff Green scored 18 points off the bench for Brooklyn and Tyler Johnson added 17 in his first start of the season.

The Nets, who were playing without both Kyrie Irving and Kevin Durant, won their fourth straight game. Irving was nursing a sore lower back, while Durant missed his second consecutive game with a mild hamstring injury.

Chris Paul scored 17 of his 29 points in the fourth quarter and Devin Booker added 22 with seven assists as the Phoenix Suns saw their season-best winning streak end at six games. The Suns led the entire game until the Nets took their first lead on a Harden three-pointer with 31.4 seconds remaining.

The game marked the return of first-year Nets head coach Steve Nash to Phoenix, where he earned MVP honours in 2005 and 2006. The Suns increased capacity from 1,500 fans to 3,000 for the occasion.

Despite trailing 73-49 late in the second quarter, the Nets pulled within two points at 108-106 with 6:40 remaining after a 3-pointer by Johnson. Green got the Nets to within one point at 124-123 with 59.6 seconds remaining on a drive to the basket and a layup.

The Nets trailed by 21 points at halftime of tonight’s victory over Phoenix, marking the largest halftime comeback for the Nets since joining the NBA in 1976. pic.twitter.com/MuZNmPsWsZ

LeBron James totalled 30 points, 13 rebounds and seven assists to lead the Los Angeles Lakers to a 112-104 road victory over the Minnesota Timberwolves in Minneapolis.

The Lakers, one of the best road teams in the league this season, won for the 13th time in 16 games away from L.A. and prevailed for the eighth time in their past nine games overall.

Playing without Anthony Davis, who is expected to miss multiple weeks after straining his right Achilles, the Lakers trailed 81-77 with 1:56 left in the third quarter.

James sparked a 26-8 surge that helped the Lakers open up a 14-point lead in the final quarter and eventually hold on for the victory.

Towns was averaging 21 points over his first three games back since returning from a 13-game absence due to a positive COVID-19 test. Dennis Schroder also delivered on the offensive end shooting 9-for-15 and finishing with 24 points.

Minnesota is expected to be without guard D’Angelo Russell for the next 4-6 weeks after undergoing arthroscopic surgery on his left knee.

Kemba Walker added 17 points for the Celtics, who had lost four of their previous five.

Jokic finished with 43 points, Jamal Murray had 25 – but suffered nine turnovers – and Facundo Campazzo added 15 in his first start for short-handed Denver.

The Nuggets played without five rotation players, three of them starters. In addition to Gary Harris, P.J. Dozier and Will Barton, who all missed Sunday’s win over the Los Angeles Lakers, Paul Millsap (left knee sprain) and Monte Morris (right shoulder strain) were side-lined.

With nearly half the roster out, Jokic carried the team in the first half, scoring 29 points on 10-of-12 field goals and made all three of his long-range attempts.

Damian Lillard scored 31 points, including three three-pointers in four possessions in the fourth quarter, to lift the Portland Trail Blazers to a 115-104 win over the host Oklahoma City Thunder.

The Blazers had let a 24-point third-quarter lead slip away, trailing by five when Lillard hit the first of those three-pointers with 4:11 left to kickstart the decisive surge.

Portland scored 12 consecutive points on the trio of Lillard 3-pointers and one by Gary Trent Jr.

After starting off hot, Lillard was just 2 of 10 from the field after the first quarter before starting Portland’s comeback. He scored 14 points in the fourth quarter.

Trent added 19 points in the win for Portland and Enes Kanter had a game-high 21 rebounds.

Shai Gilgeous-Alexander missed his sixth game in the last eight and fourth in a row with a left knee sprain.

Blazers guard CJ McCollum, who has been out since suffering a left foot fracture on Jan. 16, was re-evaluated Tuesday. He will no longer be required to wear a walking boot and will be checked again in two weeks.

Zion Williamson scored 31 points as the New Orleans Pelicans salvaged the final game of a four-game road trip by defeating the Memphis Grizzlies 144-113.

Zion Williamson is the only player in NBA history to average 23+ points per game on 60% or better field goal percentage through their first 50 career games. pic.twitter.com/VyLRsF1ljF

The Pelicans, who allowed an average of 132 points in losses against Chicago, Dallas and Detroit, took control by allowing 49 points total in the second and third quarters.

New Orleans, which defeated visiting Memphis 118-109 on Feb. 6, beat the Grizzlies for a fifth consecutive time over the last two seasons.

Ja Morant scored 28, Kyle Anderson had 19, Dillon Brooks added 18 and Jonas Valanciunas had 10 for the Grizzlies.

Fred VanVleet scored 33 points and added seven assists and the visiting Toronto Raptors defeated the Milwaukee Bucks 124-113 Tuesday night in the opener of a two-game set.

The Raptors, who had lost two in a row, handed the Bucks their fourth straight loss.

Kyle Lowry scored 18 points for Toronto before leaving the game for good because of a left ankle injury with 8:42 to play in the third quarter. He also exited late in the first half but returned to start the third quarter.

Pat Connaughton scored 18 of his season-best 20 points in the first half for the Bucks. Bobby Portis had 16 points, Donte DiVincenzo scored 12 and Bryn Forbes and Khris Middleton each had 11.

Milwaukee was without Jrue Holiday (health and safety protocols) for the fifth straight game.