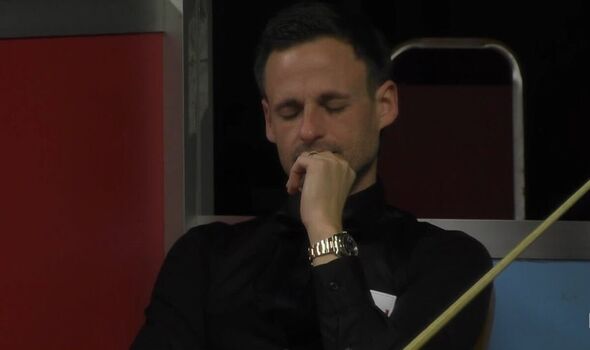 David Gilbert faces a disciplinary probe from snooker chiefs after astonishingly walking out of his German qualifying match against Andy Hicks. An exasperated Gilbert left his veteran opponent stunned by shaking hands mid-way through a frame he still had a chance of winning, ultimately conceding the match.

Gilbert – aptly named the ‘Angry Farmer’ – saw red when he trailed 3-2 in the best-of-nine contest. The former World Championship semi-finalist missed a regulation black while 56-1 down in the sixth frame, and quickly decided he’d had enough despite 75 points being left on the table.

The Tamworth potter struck a fine long red to get himself in, but after the black wobbled in the jaws, he immediately abandoned the match. Gilbert appeared to tell his opponent:  “That’ll do mate. I’ve got to get out, well played mate.”

The referee then confirmed that Gilbert had conceded the frame and match, giving up on his chance to compete at the Tempodrom in Berlin in January.

Hicks, a former World Championship semi-finalist himself, unsurprisingly looked taken aback by Gilbert’s decision. Gilbert cut a despondent figure throughout the match, and showed anger when missing a red in a tight third frame by slamming his cue on the ground.

READ NEXT: Mark Williams dumps underwear in bin after soiling himself during UK Championship clash

He was seen with his head in his hands in his chair and was clearly not in the best mindset to continue playing in the qualifying match at Leicester’s Morningside Arena. And he is now in hot water after a World Snooker statement confirmed he will have to explain to the WPBSA governing body why he quit the match.

The statement read: “Gilbert has been referred to the WPBSA to consider whether there will be any disciplinary action.” WPBSA rules state that players should not concede any frame or match unless they require penalty points to win and a breach could be ruled as ‘Unsporting Conduct’.

Gilbert received some criticism online for not seeing out the match, but many also expressed concern for the mental wellbeing of a player who has clearly been disillusioned with the green baize of late.

World no.17 Gilbert was discouraged by his form after qualifying for the last 32 of the UK Championship in York, where he was defeated 6-5 by Shaun Murphy. “I’m playing terribly, I hardly play now, so I’m going to play lots of bad shots, that’s just the way it is, it’s normal now. I just turn up and play at the minute,” he said before his defeat at the Barbican Centre.

“Obviously my long game is awful, my safety is awful, I can’t hit a barn door from distance, just from not playing, not practising and not winning matches.”

The most high-profile case of a player quitting mid-frame was when Ronnie O’Sullivan walked out of his UK Championship quarter-final against old rival Stephen Hendry in 2006. The Rocket, trailing 4-1 in a best-of-17 contest, stunned Hendry and the audience by conceding, and was later fined £20,800 for the incident.