Home » MLB » ‘No idea what to expect’: All eyes on Major League Baseball as Spring Training 2.0 gets underway

Spring Training 2.0 officially starts Friday across the United States as Major League Baseball will attempt to start a season in the wake of the United States setting a new record Wednesday with 50,203 new coronavirus cases, and five states reporting new highs.

“I have no idea to expect,’’ Braun, the 2011 National League MVP, told USA TODAY Sports. It’s going to be so weird in so many imaginable ways, “It’s going to be really challenging in an unprecedented time.

“If you look at the big picture, and all of the COVID-19 numbers, it’s going to be an incredible challenge to get in a full season.’’

MORE MLB: Family seeks help for Dodgers OF who is homeless and hospitalized

In St. Louis, All-Star shortstop Paul DeJong took blood and saliva tests then waited 48 hours until his test came back negative, before being permitted back into Busch Stadium.

This will be a training camp, played in every team’s home ballpark instead of their traditional spring-training facilities in Florida and Arizona, like no other.

“I think the social life will be the hardest challenge of all,’’ DeJong said. “You have to find ways to manage risk, but you need a break from the game as well. We’re going to have to hold each other accountable, while respecting each other’s boundaries. It’s going to be doing things differently than we’ve ever known.

“We have to manage things off the field as well as on the, because we can’t give them any reason to not have a season. We know that if the number of players who test positive get too high, they could pull the plug on the season, and we don’t get paid.’’

There are more than 1,600 players who underwent tests this week, and MLB is bracing itself for the staggering reality there could be more than 100 positive test results among players and staff members. MLB plans to disclose the number of positive tests each week, but won’t identify anyone unless granted permission.

“I respect the privacy of everyone regarding their health,’’ DeJong says, “but if a guy like Mike Trout doesn’t play for a week, I think people will figure it out.’’

Certainly, the threat of the exposure already has created anxiety and some panic among players. There have been four players already opting out of the season without pay. The Minnesota Twins ordered two of their older coaches to stay home. New York Mets hitting coach Chili Davis won’t be at their workouts in Citi Field, and instead will perform his job remotely from his Arizona home.

This will be a season – face masks, temperature readings and all – like no other, with safety rules and health protocols as critical as scouting reports.

“It’d be foolish for me or anybody to say that someone won’t become ill,’’ Chicago White Sox manager Rick Renteria said on a Zoom call. “We hope that that doesn’t happen. But we’re going to do everything we can and do what we have to in order to minimize the potential for that occurring.” 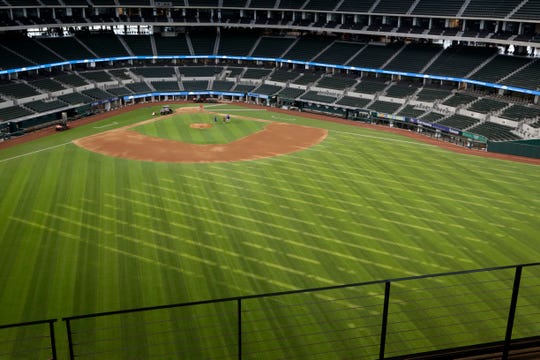 A view of the field at Globe Life Field, home of the Texas Rangers. (Photo: Tim Heitman, USA TODAY Sports)

It’s possible that players who test positive could return as early as 72 hours, but it likely could be at least 10 days to two weeks. Players must test negative twice with tests at least 24 hours apart, and have their temperature below 100.4 on three consecutive days.

Oh, if it was only that easy, you certainly didn’t catch Chicago Cubs pitching coach Tommy Hottovy’s emotional interviews Wednesday after testing positive and being quarantined for 30 days.

“You hear a lot of the stories out there like they’re professional athletes, they’re in great shape and if they get (COVID-19), they’ll be fine,” Hottovy, 38, said. “They won’t die. The rhetoric is they’re going be fine.

“They’re not going to die, but people live with family members that are not in the same shape as them. They’re not professional athletes. They are potentially high-risk individuals, and what we have to wrestle with every day is not only keeping ourselves safe and our team safe, but also what we can do to keep our family safe. …

“One little misstep or little contact situation by one person can derail an entire industry.’’

There’s a 103-page manual detailing the procedures and guidelines players and staff members must adhere to this season. Players will work out in only small groups. Teams will be using both clubhouses, the umpires’ room, and everything else they can find during their resumption of spring training. Masks will be worn. Disinfectant will be everywhere.

“What I’m worried about these next three weeks is all of the Clorox and chemicals that are going to be used in spring training camps,’’ Dr. Lawrence Rocks said. “I’m afraid that the cleaning fluids will be overdone. It goes for hotels and Starbucks and everything.

“If you don’t have the right ventilation, the players could get fluid in their lungs, and get sick.’’

The common refrain in every clubhouse: It will be a challenge. Managers will stress in their first team meetings that everyone needs to be accountable. One careless player can not only derail his team, but the entire league.

“You have to avoid your best players getting the virus,’’ Braun says. “There could be a lot of good players go down, or a team’s entire infield goes down. The teams that avoid a virus outbreak will have an advantage.’’

There is no road map to this 60-game season. Players say they’ll have to get used to not lounging together in the clubhouse for hours before a game. They’ve got to be out of the stadium 90 minutes after the final out. There will be no postgame spreads.

There also will be fewer distractions. No reporters or TV crews will be in the clubhouse. No meet-and-greets with corporate sponsors. No autograph sessions in the stadium.

“I hope they can still pump some crowd noise in to create energy,’’ Braun says. “You don’t want to have just 10 random guys in the stands clapping. You got to have music and a cool environment. We can’t do high-fives and the bro-hugs, but it creates an opportunity for teams to find really creative ways to celebrate.

“I think it has a chance to be fun, especially since it’s just 60 games. In a short season, there are so many unique challenges. Realistically, everyone has a chance. Think about it, this will be the first season that nobody is mathematically eliminated before September.’’

But, oh, will there be pressure.

One bad week could sink a team.

"The circumstances have changed, and certainly this season has changed, but the goal hasn’t changed. We want to be champions.’’