Track good 3/4 and rail true so even pattern early before gradual trend away from the fence on quality and feature Ted Ryder Cup day.

Good standard dash to open, and keen on three-year-old Canberra filly 3. Calescent who is a real specialist over this trip, hard fit, and won both starts this track. Stalked the speed to score here two runs back before a brave on-speed effort in a highway at Randwick.

Dangers: Rival four-year-old Canberra mare and former Victorian 5. Honeysuckle Choice was a little disappointing first-up here after a nice trial win, but stays at the trip and just needs some early cover from an awkward draw. Wangaratta seven-year-old gelding 2. Funding hops the border after a fair run in metro company at big odds, and then close-up under a big weight at home. Like the improvement second up from eight-year-old Yass gelding 7. It's Business Time in similar grade at Dubbo, and senior Canberra jockey goes on.

How to play it: Calescent to win
Odds and Evens: Odds 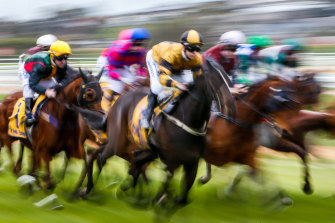 An eight-race card is scheduled for Wagga on Tuesday.Credit:Morgan Hancock

Another heat of what has become a fascinating stayers series. Improving five-year-old Canberra mare 4. Sepulchre capped some consistent form with an explosive win from off the speed in a BM 70 federal, and bolted in over the same journey last time on this track.

Dangers: Albury five-year-old gelding 3. Shinseki is knocking on the door after finishing strongly to beat all but the winner fourth-up this grade, and extra distance looks ideal. Victorian gelding 6. Almighty Gold has a sense of timing about him. Improved steadily through the prep, and looks spot-on for this trip after finishing hard behind a nice horse here a fortnight back; while four-year-old Wodonga four-year-old gelding 7. Mayor Of Methul produced a similar closing run at bigger odds in that same race behind Azaryah, and draws to do little work in the run around midfield.

How to play it: Sepulchre to win and box trifecta 3,4,6,7
Odds and Evens: Split

Good competitive sprint, with a stack of chances headed by six-year-old Queanbeyan mare 6. Our Revenue who is right at her peak after finishing hard in a stronger BM 87 federal at Canberra, and this is her pet trip. Was scratched from the feature sprint at Moruya on Sunday.

Dangers: Plenty of them! Canberra eight-year-old gelding 3. Nicof is ready to win again up in distance after finishing nicely in a BM 64 at Kembla, and then again strong late in a smart BM 83 field here. Another Canberra visitor, five-year-old mare 7. Gold Touch, is flying this prep, rattling home to win first-up at Gundagai beating Princess Cordelia, who has since won a highway before finishing over the top again in a BM 65 at Canberra under 59.5 kg. More depth here, and some concern front concussion plates are on for the first time. The Hayes-Hayes-Dabernig team cross the border with capable six-year-old gelding 1. Blue Tycoon who draws the inside and comes off some tidy runs in superior company, including beaten a neck in the Dual Choice Plate on Geelong Cup day, but he cops the visitor's weight with 63 kg. Expect a big run fresh from seven-year-old local gelding 4. Snippet Of Gold who has built a nice record, normally fires early in the prep, and looked good winning a recent trial. Local seven-year-old local gelding 2. Fermanagh Lad was out of his depth in the BM 83 Sprint behind Exaggerate, but better suited back in grade third-up from a good gate over a longer trip; while five-year-old local Albury mare 11. Nicconi Poni was heavily fancied in betting before over-run in a class 2 this track, and while she takes on stronger here, drops sharply in weight, and the front concussion plates are off for the first time.

Headline race of the day over the mile looks ideal at the weights for six-year-old local Wodonga gelding 6. Wyangle, who won the Ted Ryder Prelude in impressive fashion carrying 2.5kg more.

Dangers: Moruya seven-year-old local gelding 5. Rinviata looks well placed after a dominant BM 70 win at Gosford, and has been kept ticking over since missing the Fred Cooper Cup from the abandoned Goulburn meeting last Friday. The form of five-year-old local local mare 3. Lady Mironton stacks up well across three runs this prep, until covering ground and failing in the Wodonga Cup. Draws much better and can bounce back. Well travelled eight-year-old local Albury gelding 1. Spunlago has been up for a long time battling away in stronger company, including listed class at Caulfield early in the prep, edged out a head in the Wodonga Cup two runs back before well beaten in a BM 84 at Flemington. Obviously better placed here, but even with the claim, still a big ask carrying 60.5kg in a very handy field. Both five-year-old local Canberra geldings 7. Tobermory who draws well, and 9. Upper House, who gets in well at the weights from the inside draw, can be included in exotics.

Another even and open race. Lightly raced three-year-old local gelding 6. Tocatchacod resumes with no official trial, but only career win came first-up, and draws to get the right run.

Dangers: Wodonga four-year-old local gelding 1. Banger draws the inside, and looks ready to win after four runs back. Flashed home from the back in similar grade this track last start. Goulburn three-year-old local gelding 3. O'so Tempting didn't do much resuming here, but second-up form is stronger in a race that looks a bit weaker, although will need the breaks to get in from the outside barrier. Canberra six-year-old local mare 4. Kathaire is not a noted fresh performer, but has had two solid trials for a strong trainer/rider combination, and draws to get a nice trail. Include five-year-old local Wodonga gelding 12. Strikeman in exotics after flying home to win his maiden at big odds two runs back before a nice closing effort this grade behind Boo Radley when well specked at a big price.

Tough race over the short course, although three-year-old local Canberra filly 8. Disobedient only needs to find some cover from a tricky barrier to be the one to beat. After a slow start to the prep has shown rapid improvement, and was very well backed last start before outclassed by the smart Brussels.

Dangers: Canberra filly 14. Singing Dixie hasn't started since failing on debut at Gundagai as a well-backed favourite in early August, but has trialled OK, although another one drawn off the track. Wodonga four-year-old mare 4. Wyandra Ruby hit the line hard from a mile back on debut at Wangaratta, despite blowing in the market, and longer straight here should suit even better; while three-year-old local local gelding 13. Pushkar resumed with a tidy closing run at Canberra, and wouldn't need to improve much to be in the finish.

How to play it: Disobedient to win
Odds and Evens: Evens

It doesn't get much easier here, although this stacks up well for improving four-year-old local gelding 6. Zarsnip, who has hit the line hard in his last two on this track, and will appreciate the extra journey with the blinkers coming off.

How to play it: Zarsnip to win
Odds and Evens: Evens

Good competitive race to finish. Keen on four-year-old local local gelding 4. Jungle Book who went for a bath in the market last start at Canberra, but still found the line well despite getting little luck or room in the straight. Has powered home to win his last two on this track in similar grade, and is much more effective drawn outside horses.

Dangers: Victorian filly 11. La Magnat from the David Hayes base is the obvious threat after a dominant maiden win here this trip when heavily backed, and draws to stalk the speed again. Progressive four-year-old local local mare 3. Blazen Diamond also resumes off a break, and wasn't far away in two deeper races after winning consecutive BM 58s in September. Local four-year-old local gelding 1. Jaytee's The Fox has had a lengthy freshen-up since charging home to win the Aggies Cup here over a mile and an even effort in a stronger highway at Randwick. Smart on his day, but almost looks weighted out of it under a massive 64kg. Canberra five-year-old local gelding 5. Sugar Pine was heavily backed when swamped late in a class 1 this track last start, but draws the inside and has more ability than his one win and five placings from 15 starts suggests. Wodonga five-year-old local mare 9. It's Christmas sailed down the middle to win her maiden first-up on this track, but faces a tougher run in this; while improving four-year-old local Cowra mare 6. Brunela finally landed her maiden careering away by six lengths at Wellington, and while this is tougher, will take some catching if she can find the front easily enough from a wider draw.

How to play it: Jungle Book each way and quinella 4 and 11
Odds and Evens: Split