Selections based on a good track.

3. Kenneth should give a good sight each-way given he’ll probably find the lead. Granted he started $21 at Dubbo last start but he ran along and was only cut down in the last 100m. Tamworth should suit him. Has a good chance.

Dangers: 6. In Fiore will be well fancied on the back of a nice second in a trial at Newcastle recently. Drawn well and any support on race day will be significant. 14. Guinness is another first starter and she hasn’t been seen since a handy trial win back in November. Well bred and again if there’s support for her she’ll likely run well. 9. Friendly Venture wasn’t disgraced on debut at Gunnedah when in the market and the extra 200m looks in her favour. No surprise to see improvement and that puts her in the picture.

How to play it: Kenneth E/W.

5. Final Crown put in her best effort in five starts to date when a closing second at Tamworth a couple of weeks ago. Shapes as though 1400m will suit, drawn the inside and can only be fitter. Looks a good each-way chance.

Dangers: 1. Galina has her first run for Brett Cavanough and it’s fair to say she’s been disappointing albeit in city and provincial company. Every chance at Hawkesbury last time but new stable, host of gear changes and easier race. Still needs luck and might be unders but have to consider. 2. James Richard was a beaten favourite at Muswellbrook but by less than a length and he always hits the line well. One of the chances again. 3. Son Of A Dun is an improver who has finished close up in both starts so far. Left it a bit late at Scone last time but has another 100m here. Winning chance.

How to play it: Final Crown E/W.

10. Aliferous is a short-priced favourite but deservedly so and she should get back into the winner’s stall here. First two runs back solid then had plenty of excuses at Canterbury last start in a stop-start race. Clearly the one to beat.

Dangers: 13. Zouling won well over 1400m here a month ago then didn’t dash but stayed on for a close third over the same course. Goes to the mile and she’ll be on the pace and in this for a long way. 5. Magic Charlee is an improver who produced a nice finish to win running away over a mile at Scone two weeks ago. Up in class but down in weight and no reason he can’t be competitive. 11. Emanuela was a big winner first-up then probably wanting further as she ran on fairly for fourth at a similar trip at Scone. Extra 300m a help here and she’s in the mix.

2. Manabar has been a revelation at his last three starts where he’s put an average of five lengths on his opposition. They don’t win any easier than his last start over this course a month ago and trialled against some smart ones since. The one to catch.

Dangers: 6. Majestic Pedrille has a good first-up record and trialled strongly leading into this race. Has been competitive in Highway races in Sydney and from the perfect gate she can’t be overlooked. 4. King Mombassa is an ex-Victorian and he beat a couple of Sydney class horses in winning a trial at Newcastle. In good hands and pay to keep him very safe first-up. 10. Arleta is a consistent mare who gets back a bit but is fitter for a closing effort at Scone a couple of weeks back. Sure to be around the money somewhere.

The race sets up well for 3. Burning Crown with a bit of speed engaged to allow him to take a sit. Engaged in a speed battle at Rosehill first-up which didn’t suit him, he should settle just off them here and hit the line, that’s when he’s been most dynamic. Take beating.

Dangers: 10. Legendofoz has the blinkers on and a soft gate and he’s down in class on an even effort at Scone last time. Plenty to like about him and if the favourite falters then he’ll be right there. 9. Je Suis Tycoon gave a slick one a fright first-up at Port Macquarie and some speed on would suit her. Second-up record is patchy but she’s generally pretty honest. 4. Syd’s Footprints is the likely leader and if he happens to get a soft lead he can take running down. Not disgraced when well supported behind Safe Landing at Warwick Farm and this is easier.

Open race. 10. Billy Bent Ear is racing well at the moment and has drawn to get the nice sit just off the speed. Back 100m when just missed at Muswellbrook on March 1 and his best form is at the 1000m. Go well but no good thing.

Dangers: 9. Shot At The Reward ran them off their feet at Gunnedah a couple of weeks back and is likely to attempt the same here. Placed in both starts on his home track and sure to give a sight. 1. Sister Joy has a poor first-up record on paper but has run a couple of nice races fresh. In well with the claim, drawn the inside and it wouldn’t surprise if she found herself in the finish. 5. Jazzee Nicc has been thereabouts without winning and fought on hard at Gunnedah as an easing favourite last time. In the mix.

How to play it: Billy Bent Ear E/W. 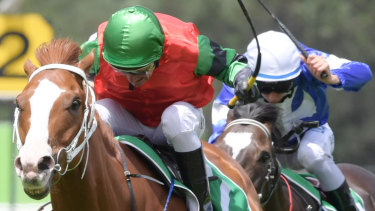 Hard to hold out: Moobi appears the one to beat in the Country Championships qualifier.Credit:AAP

6. Moobi is a backmarker so will need some favours but he’s just been so impressive through the grades he’s sure to be hard to hold out. Looked good in his trials since a Warwick Farm Highway win in December. He’ll be charging over the top of them late.

Dangers: 1. Suncraze is the best horse in the race and won this race last year in the last couple of strides. Kept fresh and wasn’t asked for anything in his recent trial. If Moobi is in the finish from the back then Suncraze will be too. 2. Art D’Amour has an imposing first-up record and looks to have been revved right up in his two trials leading into this. Hasn’t won for a while but he’s way over the odds on his best form. 15. Roman Typhoon is coming along well with an easy win here over 1000m then closed late to score at Muswellbrook. Last win suggested 1400m is no issue and he’s an each-way chance. 4. Mr Pumblechook will give a sight on the speed and keep 5. Beauty Best safe as well in a wide-open race.

9. Finne Realta didn’t have any luck from barrier one here last time when an odds-on favourite. Goes to 1400m for the first time but if she lands into a good spot on the pace then she should be hard to beat.

Dangers: 4. Chuck’n’Paul is racing well and has a couple of placings here either side of an easy Quirindi win. Back a notch in class and no worries with the distance. Strong claims. 3. Invincible Bot was in the market in the same race as Finne Realta and seemed to have every chance. Senior rider on and has barrier one so entitled to another chance. 1. New Endeavour is down in class on his last couple of runs and he wasn’t disgraced behind Roman Typhoon at Muswellbrook. The claim helps and he’s an each-way hope.