Selections based on a good track. Monitor for bias/pattern.

1. Diamond Drummer wasn’t suited and had excuses last start at Canterbury 13 days ago. Further, he ran on well into third place and clocked one of the fastest final 400m splits of the meeting in 22.68. The four-year-old is racing well/consistently this prep and brings a dominant ratings profile relative to his rivals. In addition, the blinkers go back on; the dry track is ideal and expect him to be hard to beat. 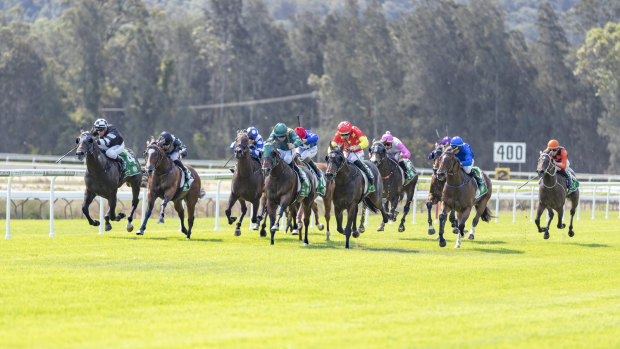 Racing returns to Wyong on Thursday.

Dangers: 7. Rangitikei was a drifter in the betting last start and ran on ok. She is coming out of time/ sectional merit races this prep, and the step to 1600m suits. 8. Zimtopia comes through the same form reference but got too far back. The mare will benefit from the race experience and will be running on again. Add 5. Isla who maps to control the pace.

How to play it: Diamond Drummer WIN. Odds & Evens: ODDS.

2. Captain George resumes as a gelding and is wound up for this after three solid hit outs at the trials. The four-year-old brings strong form lines to this event and has past figures that can put him in the finish. Moreover, he has a favourable map, and he finally strikes a dry track. Each-way.

Dangers: 6. Oakfield Paperbark was slow out and got too far back last start but ran on well and hit the line. The anticipated genuine tempo will benefit her, and she will look to swoop on her rivals late. 3. Jabali Belle sat outside the leader in a high-rating race on debut at Hawkesbury and battled on ok. She will be fitter for that and will roll forward. 1. Exsensible receives a significant barrier change and will have a much more economical run-in transit. Add 4. Oakfield Blue Bell, who was honest last start in a proven form reference.

How to play it: Captain George E/W. Odds & Evens: EVENS.

1. Edge Of Reward had all favours last start but tried hard in defeat when running second to Wrathful, who subsequently won again. The gelding has been a model of consistency this prep and has a strong starting price profile. Additionally, he is rock-hard fit, will roll forward and take some catching. Expect a bold showing.

Dangers: 6. Galactic Angel drops back to the provincial circuit and maps to have all favours. 3. Frosbie had the pace/bias against on debut at Port Macquarie and ran on well into fourth place. The step-up in distance suits and watch for him late. 5. Emphatic Bel is coming out of a high-rating race and was honest. She must now step sharply in grade but will make her own luck up on the pace. First starter 2. Beauty Crusader has trialled well enough and is a key late-market watch.

How to play it: Edge Of Reward WIN. Odds & Evens: SPLIT.

Debutante 9. Meod is a nice type and trialled well in slick time in a recent heat at Kensington. Further, she went through the line full of energy under light riding. Expect her to find a positive map position and run well.

Dangers: 13. Surrenders resumes and has trialled well in preparation for this assignment. The Godolphin filly had excuses first-up last prep but raced well behind the smart Alpha One. She will need the splits to come at the right time, but she can win. 3. Biographer is first-up for his new trainer Ron Quinton and looks wound-up for this event. He has metropolitan form lines and can rate to win. Add 5. Doola Teela who is a knockout chance.

1. Dimaggio resumes and had a quiet trial recently at Wyong, where he went through the line full of energy. The six-year-old went to a new level last prep, racing consistently and producing multiple career peak figures. He maps to have all favours, gets in well at the weights after the claim and has a string of winning ratings. Expect a bold showing.

Dangers: 2. Swamp Nation was solid first-up at Grafton and will undoubtedly improve off that effort. The step up in distance is ideal and watch for her late. 4. Moralist had all favours when saluting last start at Gosford but finds another winnable race. 3. Ranuncula didn’t have much luck last start and market watch on 5. Crimson Rock.

How to play it: Dimaggio WIN. Odds & Evens: SPLIT.

8. Ausbred Flirt profiles well for this race, and all indicators suggest she is ready to peak third-up. The four-year-old got too far back last start at Hawkesbury and was held up at key stages in the final straight. Further, once clear, she savaged the line and ran one of the fastest final 200m splits of the meeting in 11.36. The anticipated genuine tempo will suit the mare and allow her to run on and hit the line.

Dangers: When breaking through for his maiden win 1. Oakfield Waratah was dominant at this track/distance 19 days ago. Moreover, he showed key attributes that day and ran slick time relative
to the meeting after adjustments. He can make the step-in grade from the soft draw and will undoubtedly be in the finish. 9. Bat Out Of Hell was sound last start at Scone and receives a senior rider in Kerrin McEvoy for the first time in his career. Add 11. Kobenhavn and 3. Bionic to trifectas and first fours.

How to play it: Ausbred Flirt WIN. Odds & Evens: SPLIT.

1. Mabel overcame difficulties and easily won first-up at Hawkesbury 15 days ago. The mare was checked/blocked at stages in the final straight, but once clear, she accelerated away and ran the fastest final 400m split of the meeting in 21.96. The Tracy Bartley-trained galloper gets a similar setup here with a perfect map to stalk the speed and the extra distance suits.

Dangers: 4. Xpresso looks to have come back well and won a recent heat at Wyong in style. The relatively lightly raced galloper has always promised ability; from the soft draw, he can roll forward and give a sight. Over the odds. 2. Hard To Say broke through for his maiden win last start and ran solid time. He is a key late-market watch. Although 8. Oakfield Mahogany is more suited over more distance; he can sprint fresh and will be savaging the line.

How to play it: Mabel WIN. Odds & Evens: SPLIT.

Forgiving of 6. Vincenzo’s last start at Kembla in a similar grade, where he was wide throughout and overraced. Moreover, he was well-fancied throughout the day and was backed into $4.80 late in the trade. Prior to that start, he ran fast time winning on debut and hit the line hard, running strong closing sectionals. The blinkers come off and expect him to bounce back.

Dangers: 9. Singapura, who represents value, is at optimal fitness and has raced well in his past two starts in stronger grade. The gelding gets in well at the weights after the claim, and if he gets luck, he can be in the finish. 1. Da Nang Star bolted in last start at Port Macquarie and maps to have all favours. 3. Kickatorp gets the blinkers on for the first time and 2. Duke Of Buckingham will be fitter.

News, results and expert analysis from the weekend of sport sent every Monday. Sign up for our Sport newsletter