Randwick specialist Quackerjack once again proved he is one tough horse to get past as his trainer Mark Newnham reminded the racing world why he is one seriously talented trainer.

There was plenty of emotion in the enclosure at Sydney HQ after the group 2 Villiers Stakes (1600m) when Quackerjack and jockey Rachel King somehow got the bob in ahead of Invincible Gem on the line. 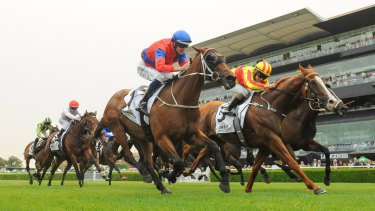 Rachel King rides Quackerjack to the line in the Villiers Stakes at Randwick.Credit:AAP

The victory now gives Quackerjack a guaranteed start in the Doncaster in the autumn when Newnham knows his chestnut will be a decent lightweight chance at his favourite track and distance.

Josh Parr also deserved special praise given he only missed out on the ride because Newnham thought Quackerjack would receive too much weight, and made a point of helping King plot the summer win.

"You can put him on wet tracks, dry tracks, he just gets up on the pace and does his thing.

"I thought he got beaten. But he's so hard to get past. I'm sure the other one [Invincible Gem] had a head on him a stride before the line and a stride after it, but the one on the line is the one that matters.

"Everyone had their chance to come and beat him. As soon as he looks like getting beaten he raises another effort. Horses like that you have to love them.''

Quackerjack and King went to the front at the 1000m and there was no shortage of challengers up the straight.

Invincible Gem and Hugh Bowman switched back to the inside of Quackerjack but fell just short.

It was still an almighty effort under the 59kg to be beaten by a nose by Quackerjack ($3.80) with Sambro ($19) a short neck away third.

Newnham, who has quickly shot up the Sydney training ranks in just three-and-a-half years, said he would be crazy to pass on the Doncaster entry.

He praised King and Parr equally for playing a huge role in the horse's latest campaign.

"Rachel was great, and after Kembla [The Gong] I didn't think the horse would get enough weight for Josh to get back on,'' Newnham said.

"I feel sorry for Josh, but he's helped Rachel on how to ride him. She gave another faultless display.

"When Rachel first rode him at Goulburn, Josh was on phone saying 'these are his assets' and 'make sure you use them to make the race a test', and she remembered that.''

King, who rode her first group 1 winner for Newnham on Maid Of Heaven, was pumped to grab group 2 cash on a horse she thought had just clung to victory.

"I did think his head was in front but I didn't want to be too confident in case we were beaten.

"Josh been really good, he explained to me what the horse was like and helped me learn how to ride him to the best of his ability.''

Parr, who watched the win from the jockeys' room, said: "He's a very tough horse, and you wouldn't believe your eyes at times if you saw him at trackwork and the pressure he is able to absorb – his ability to continue running at a strong speed is remarkable. That was no fluke by him out there today at all.''

Quackerjack was also the first horse Newnham snapped up at auction with the chestnut's earnings now north of $800,000.

Meanwhile, John O'Shea's grey Berdibek looked ready to land his first win on Australian soil and was backed in from double-figure odds to start at $5, only to fall just short of Matowi and Turnberry in the Heineken 3 Handicap (1600m).