With the first whiff of spring, Melbourne – featuring Mystic Journey in the P.B. Lawrence Stakes at Caulfield – has overshadowed the corresponding sub-Saturday meeting on the second string Kensington circuit at Royal Randwick.

It follows the strong Flemington program seven days earlier, which certainly appeased the turnover gods to a greater degree than the five-horse Missile Stakes at Rosehill Gardens. 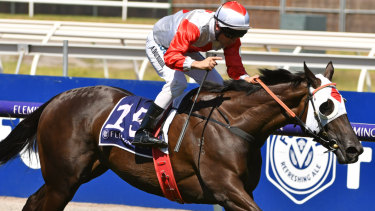 Mystic Journey, with Anthony Darmanin in the saddle, beats the boys in the group 1 Australian Guineas at Flemington.Credit:AAP

Under the generalship of Racing NSW’s Peter V’landys, Sydney is out to break the southern capital’s domination of the spring but is giving a considerable start in what promises to be a season for four-year-old mares.

The Tasmanian Mystic Journey, a winner of 10 out of 13 attempts, leads the way. Another, Verry Elleegant, is cooling her hooves at Chris Waller’s stable. Both are set for the Cox Plate at Moonee Valley in October, arguably Australia’s best race.

Considering the twittersphere accusations abounding down south in recent weeks about their local scene, Racing NSW stewards were active at Rosehill last Saturday, triggered by another strong fancy, Black Magnum, being beaten so far by the money horse, Prime Candidate, that racecaller Darren Flindell commented: “Better send a search party out for this favourite." 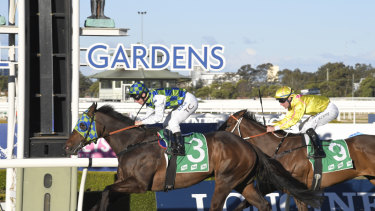 Favourites, some false, get beaten at every meeting but two by over 10 lengths on consecutive Saturdays is disturbing. Thankfully Mark Van Gestel, the Racing NSW law enforcer, is taking the appropriate action.

Even with Bowman and Kerrin McEvoy heading to Caulfield today, plenty of topliners are left for the Kensington action, including James McDonald and Rawiller, long and strong after his spell.

On the right mount, Rawiller works like a successful gear change, and it could be seen to advantage on Commander in the Events By ATC handicap, which is already reduced to seven starters.

Yes, Randwick today has some promising types, but they don’t rate with those in the Caulfield preliminaries supporting the Lawrence, in which Mystic Journey will take on Hartnell, a brave warrior although little more than a punching bag for Winx.

Now nine, Hartnell will be out to prove he still has horsepower to match his charisma.

Apart from Hartnell, Mystic Journey’s rivals include Cliff’s Edge, which will be improved with the benefit of a recent race, and Kenedna, which was a group 1 winner at Doomben in May and, although resuming from a spell, has residual fitness from the Queensland campaign.

So the field has some depth, which applies to other races on the program, particularly the Quezette Stakes in which  James Cummings has Bowman riding Pin Sec and McEvoy on Exhilarates, both of which were Golden Slipper failures but had their ability dimmed by the heavy track.

First pick in the market against them is Lyre, the minor placegetter in the Golden Slipper, while the promising Cheer Leader, a member of the Snowden team, adds more Sydney flavour to the sprint.

With the mention of a Cummings, memories returned of Randwick trackwork when the Master, Bart, in his final years was mentoring grandson James. I would approach him to see what incendiaries he was lighting under the young lions like John O’Shea.

“Have you any wisdom for them, Master?” he was asked.

“Yes: be good to your mother,” Cummings replied.

Begood Toya Mother, the winner of his last five starts, is strongly fancied in the Regal Roller Stakes at Caulfield. Obviously a mouthful but easier on the tongue than Rat With Goldtooth, which is favourite in the Black Caviar Tribute earlier on the program.