Tommy Berry remembers Pierata’s trainer Greg Hickman chasing him around the streets of Warwick Farm as a kid.

It was when Berry was more of a pest to the hardworking trainer than needed by him.  Now he can’t believe he might team with Hickman to win the $14 million Everest at Randwick on Saturday. 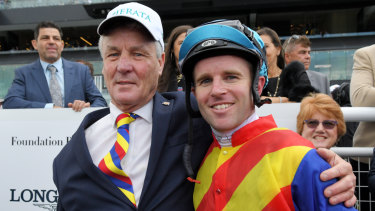 Berry always talks uses the word "we" about himself and twin brother Nathan, who died from Norse Syndrome in 2014, as kids.

“We gave him hell. Greg was always there for us as kids and we made his life hell.

“Greg has had his ups and downs but he has always been good to me from the time I started. He has always come through with a good horse.

“Mum and dad have worked for him and I have been in and out of his stable all of my life. He is like family.

”He probably saw me as a pain in the arse when I was kid.

"But now it's great to be riding for someone like him because he knows who I am and where I came from. It makes it a bit more special heading into Saturday.”

Hickman lived near the Berrys in the western Sydney racing precinct. When he got Pierata there were plenty of jockeys who wanted the ride but the trainer was looking for the chance to put Berry in the saddle.

“I always felt he would suit the horse. He just seemed like the right jockey for him and when he won his group 1 in the All Aged Stakes it was great to have him riding,” Hickman said. “Tommy and Nathan kept me on my toes when they were kids and I have watched them grow up.

"It's sad what happen with Nathan,  but Tommy has become a star.

“I used to give him rides when he was kid but he is a bit too good to ride my horses most of the time now.”

Berry still feels like Warwick Farm is home, even though he has moved away and has a family of his own these days. He returns to visit dad John and mum Julie and remains drawn to the Hickman stable.

“I'd move back there tomorrow, if it was my choice. It is home,” Berry said. “It is funny with this horse because he is owned by a lot of locals from around Warwick Farm and I’m sure I went to school with their kids. 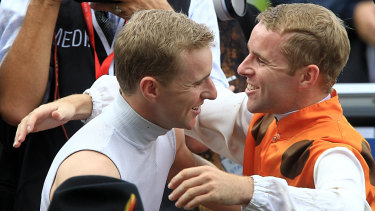 Tommy Berry (right) and his late brother Nathan after the 2013 Golden Slipper.Credit:Jenny Evans

"When I get off him after races and look at a couple of the owners, I think 'I have known you guys for a long time'.

“The great thing about Pierata is dad is looking after him in the stable now.

“I’ll ring him and ask how is [Pierata]  and dad’ll say “good”. Greg’s the same. If they said more I would be worried.”

Berry has been out to Warwick Farm to ride Pierata since he won The Shorts last month and his opinion lengthens to a couple of phrases rather than just words when discussing the Everest hopeful.

“It is the best he has been since I have been on him,” Berry said. “I have feel like he is ready to run the race of his life on Saturday.

“It will be as good as it gets if he wins because it will be a win for home.”