Dandenong Council is warning that Melbourne Racing Club’s plan to end horse racing at Sandown and redevelop the sprawling racetrack into a new suburb the size of Wangaratta may create traffic congestion and cram in too much housing.

The racing club wants to rezone the 112-hectare site in Melbourne’s south-east from “special use” to housing so it can sell the land for a far higher price. The money would then be poured back into its $300 million redevelopment of Caulfield racecourse. 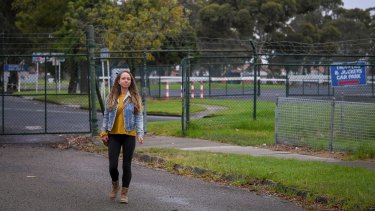 Springvale resident Zoe Mohl, outside Sandown Racecourse, says the number of houses planned on the site is “extreme”.Credit:Eddie Jim

However, Dandenong mayor Angela Long said the lack of sporting stadiums in Melbourne’s south-east was among the reasons horse racing should stay at Sandown.

“I am a little bit disappointed that the MRC are doing this,” she said.

“I would prefer it stay as a sporting venue, whether it’s horse racing or car racing – we’ve got no big stadiums out this way.”

There has been a racing track on the land since 1888 and it has been both a horse racetrack and motor raceway in its current form since the 1960s. The grandstand at the racetrack, built in 1962 for the motor racing circuit, was heritage listed in 2019. 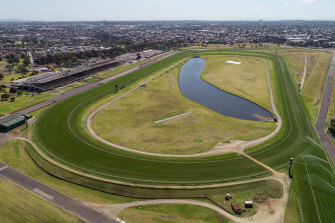 The Melbourne Racing Club wants to rezone its Sandown racecourse and sell it for housing.Credit:Joe Armao

The racing club approached the council about rezoning the land more than two years ago. The MRC has now drafted a formal rezoning plan and will brief Dandenong’s 11 councillors on it on April 16.

Cr Long said the loss of Sandown as a sporting venue, on top of the closure in 1999 of VFL Park in Waverley – now a training venue for Hawthorn and surrounded by housing – would be a blow to residents of Melbourne’s south-east.

“Now they’re getting rid of Sandown. We’ve got to travel to Melbourne or the other side of Melbourne to other venues and that’s a shame because out this way it’s a growing population.” 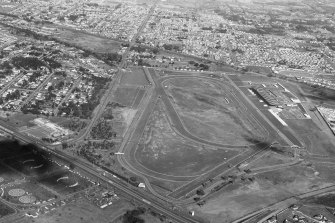 Sandown in 1965.Credit:State Library of Victoria

She said developing the land was “a golden opportunity for housing, but how dense that housing is, that’s what we’re going to be worried about”.

The Melbourne Racing Club declined to comment on the rezoning plan. 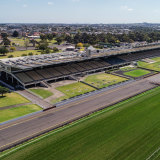 Zoe Mohl, a Springvale resident who lives near the track, said horse racing was not a problem, but complained about the car racing.

“It’s not like a constant thing, but when it’s on, it’s loud. I’m within one kilometre as the crow flies, but you can hear it as if it’s just down the street.”

She said the scale of what was planned would overwhelm the site, even though it was very large.

“The scale they are planning, it’s extreme. We’ll go from having it an empty racecourse now to it being loaded with people.”

“If they could cut it in half of the size they are proposing it would be reasonable. I think they just see the price tag on what they can sell.”

Ms Mohl said it was great housing would be built on the site, because urban sprawl was not ideal: “It’s better to build up rather than out, and people need somewhere to live.” 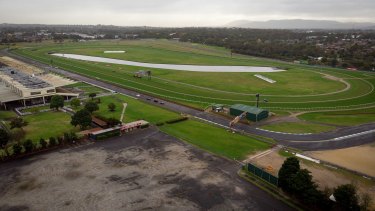 However, she found the number of new houses was “a bit shocking”.

Dandenong Council city planning director Jody Bosman, who is highly supportive of the development, said he anticipated the rezoning plan from the club would be formally handed to the council by the middle of the year.

Before then, a workshop is scheduled for mid-April when the MRC and development consultant Urbis, one of the country’s biggest urban planners, would meet with councillors.

“A formal report could possibly be tabled in May or June 2021,” Mr Bosman said. Under state planning rules, the racing club will work up a formal proposal and then work with the council on a plan that would ultimately be signed off on by the planning minister.

Dandenong councillor Rhonda Garad said she worried that developing Sandown would cause immense problems for locals.

“I’m concerned the Princes Highway will become a car park and the surrounding areas very congested with the number of cars coming out of this site.”

The Greens councillor said infrastructure like new schools and bus routes often lagged years behind. She said in her ward of Keysborough South “it took 20 years to get a primary school”.

While the venue is regarded as one of the Victorian racing industry’s greatest assets, former racing commentator Bryan Martin, who, as a 15-year-old, was one of 58,000 who attended the first Sandown race meeting in 1965, said it was only a matter of time before the course joined the likes of Mordialloc, Epsom, Aspendale and Mentone racetracks in extinction. 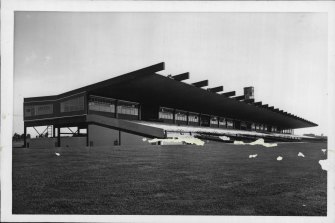 The grandstand in 1965. It was heritage listed in 2019.Credit:Stuart Penberthy

“I don’t think it’s got a future sadly, but it will be very sad to see it go because it’s a great workhorse for the industry,” Martin said.

“To be fair, crowds over the last 20 years haven’t warmed to going back there … and the amenities have gone to wrack and ruin, but that’s a commercial decision to be made, [whether] to keep spending money when no one turns up. It’s sad.”

Racing began there in 1888, when the privately-owned track known as Oakleigh Park Racecourse opened. Horses raced there until the 1930s when it was shut along with several other metropolitan racecourses.

Motor racing reopened there in 1962 and horses in 1965, and since then both tracks have played host to annual races like the Sandown 500 for Supercars and the Zipping Classic at the end of the Melbourne Spring Carnival.

While the MRC announced in May 2019 it had undertaken a strategic review of its land holdings, the council has been working with the racing club for more than two years on the rezoning proposal.

While the club says on its website that racing activities at Sandown will remain active for the foreseeable future, a future sale of Sandown would help the club achieve its $300 million transformation of Caulfield Racecourse. That project includes the addition of a new inner racetrack under lights to accommodate night racing.

“It’s a costly venue for the Melbourne Racing Club to operate,” he said.

“It takes on a lot of the race meetings for the industry and that’s fantastic for wagering and for horse preparation and for metro prize money, but the Melbourne Racing Club is the one that wears that cost.”

Mr Blanksby said the process to rezone Sandown would allow the club “to understand the possibilities”.

“We’re still going through that process,” he said.