The prospect of international racehorses travelling to Melbourne for the spring carnival without staff is still viable, according to leading horse charter company IRT.

However, overseas trainers and stablehands won't be allowed to come to Australia if the current coronavirus restrictions on international travel remain in place. 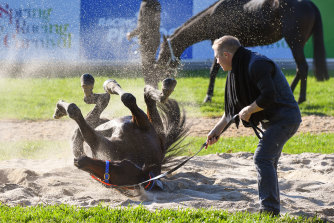 The prospect of international racehorses travelling to Melbourne for the spring carnival without staff is still viable, according to leading horse charter company IRT.Credit:AAP

IRT operations director Lachie Ford says his company is in discussions with government groups for permission to bring horses to Australia using a team of his grooms.

Ford said the service wouldn't operate too differently to how it did last spring, however, under the proposal, Australian staff would have to meet the horses on arrival.

"The old days of stallion grooms coming down or say Ed Dunlop wanted to send horses and put his grooms on [the plane], that process has probably changed where we would have to have professional grooms only on flights," Ford said.

"That's what we're working through at the moment.

"The difference here is, what do they do when they get to Australia? They either have to transfer to Australian trainers or whether there's a border process that allows some international participants to come in under a VISA program, but that's a long way down the track."

IRT's business is currently in complete shutdown, but Ford said he hoped to be operating soon with government exemption. At least 25 shuttle stallions are due in Australia by August 1.

"We're in strong discussion with a lot of the government groups to say, our boys that fly, let's pool five or six people, they're technically the equivalent of a crew for a passenger aircraft. 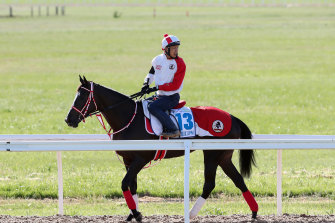 "They're actually safer passenger aircraft because they're not mixing with anyone other than crew and horses. If we allocate those people to be flying grooms around the world, they could accompany horses."

"At the moment though, horses can still move," Thompson told RSN on Tuesday morning.

"There are measures around that, so it's still possible but they wouldn't necessarily come with a group of people.

"While the horses still come, can all of the entourage come? For some people, that would put them off. Don't rule it out but there are going to be challenges around that."

Meanwhile, Thompson said any decisions around prizemoney or changes to the spring carnival program would not be decided until June.

"We are shifting [our planning] from a week-to-week basis to start thinking longer term," he said.

"We're beginning to run out of time and we'll have to make calls as we enter June, which is only five or six weeks away.

"[But] right now, we don't think we have to make any core decisions around the spring and we're hoping we'll continue to race, and if we are continuing to race in four weeks then we'll be more optimistic about the spring program."