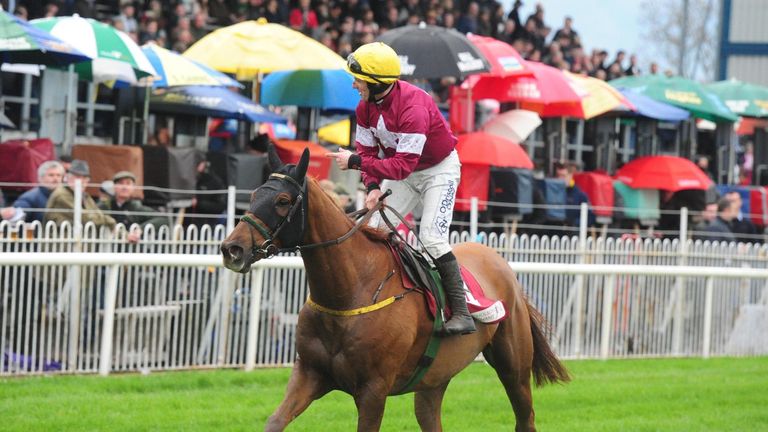 Noel Meade is mulling the Leopardstown Christmas Chase or the King George VI Chase at Kempton as possible options for Road To Respect following his impressive return to action at Down Royal last weekend.

The seven-year-old claimed the second of his three Grade One victories to date in last season’s Christmas Chase before going on to finish fourth in the Cheltenham Gold Cup and third in the Punchestown Gold Cup.

Road To Respect dominated his rivals on his return to action in Saturday’s JNwine.com Champion Chase and Meade is hopeful his charge has progressed again.

Speaking at the launch of the National Hunt season in County Meath, Meade said: “You go to the races hoping things go right and they all went right on Saturday.

“I haven’t discussed it yet, but I’m sure the plan would be Christmas. He jumps a little bit left so it would make a lot of sense to go at Christmas.

“He is entered in the King George, but that’s one thing about Michael (O’Leary, owner) – he doesn’t mind you making your mind up closer to the day.

“Last year he didn’t run in the Irish Gold Cup (at Leopardstown in February) and I thought it might have been a mistake at the time. We’ll see this year, but we’ll go to Christmas first and see what happens.”

“Sean (Flanagan) rides him most of the time and Damien McGillick, who also rides him some times, were both adamant he was in fantastic form, even though he was weighing 22 kilos heavier than he ever was before.

“I was actually worried, but the two boys kept saying he was right. I was tempted to give him another piece of work, but they said ‘no, don’t work him anymore because he’s as fit as a fiddle’ and they were proved right.”

Road To Respect was one of two high-profile winners for Meade at Down Royal on Saturday as Snow Falcon followed up his victory in September’s Kerry National at Listowel in the Grade Two MyCarNeedsA.com Chase.

Snow Falcon also holds a King George entry, while more immediately he has the Ladbrokes Trophy at Newbury on December 1 as an option.

However, Meade will not rush his charge back to the racecourse.

He said: “I think that he’s better when he doesn’t run too often. We kind of mucked up his season a little bit last year when we gave him a couple of quick runs on the Flat.

“He won a nice race in Killarney and then ran very well in the Cesarewitch at Navan, when second, but we made a mistake when sending him over to England to run in the English Cesarewitch. It kind of messed his whole season because it emptied him out before he started.

“Our plan with him this year is to just pick our races a little bit more and give him plenty of time between them.

“He now lives outside as well, which seems to suit him very well.”