First-time group 1-winning trainer Daniel Bowman will resist the temptation to carry on into the spring with his stable star Begood Toya Mother after the gelding’s success in the Sir Rupert Clarke Stakes at Caulfield on Saturday.

The young Warrnambool-based handler said he will now spell the five-year-old, reasoning that a series of rich races in the autumn will be better targets than the prizes on offer over the next two months. 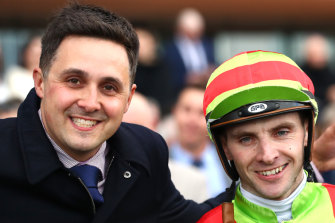 Begood Toya Mother's pet distance is 1400 metres, and there are a plethora of opportunities on offer in both Melbourne and interstate in the February to June period, and that is where Bowman will now aim the son of Myboycharlie.

"He will go to the paddock after that. (The Sir Rupert Clarke) was the Grand Final," Bowman said on Sunday morning.

He is mindful that the horse will fare much better with a decent spell now after a winter and spring campaign than if he is kept on the go for short-term gain.

"You are not going to get a long (autumn) prep out of them (if you carry on now), and with a horse like him, who is so good over 1400 metres, the autumn is the time.

"You have the two group ones at Caulfield (the Orr Stakes and the Futurity), the All Aged Stakes in Sydney and the group ones in Queensland, the Kingsford Smith and the Stradbroke, so the autumn is going to suit a horse like him a lot more.

"He will go to the paddock and after a good break he will come to build up for that campaign."

A race like the $5million All Aged mile next year could be within his compass, but Bowman was unsure whether that would fit his program.

"The prizemoney is a real carrot, but he's really a 1400 metre horse so it will probably be the Australia Stakes (at Moonee Valley in late January) then the Orr and Futurity, a freshen up and then the Queensland group ones.''

Bowman was not the only one tasting group 1 glory for the first time; his Irish jockey, Declan Bates, was also celebrating his maiden success at that level, four years after coming from his native country to Australia.

Bates was once a jumps jockey, but he has got his weight down and has worked hard, mainly in the provincial areas, to establish himself. A horse like this could be his big breakthrough.

Bowman said he had never been tempted to replace Bates with a "big-name" rider.

"I am pretty big on helping the people who have worked hard and helped to get you where you have got to," he said.

"He has a good rapport with the horse so I was more than happy to give him the chance to get down to the weight and win a group 1."

Bowman got into racing in a roundabout way. His grandfather was a bookie and his father did his pencilling, so the youngster was taken to the races on a regular basis.

"I thought there has to be a way of getting more information," he explained, so he got a job with Ciaron Maher.

"Once I started working with the horses, I fell in love."