Home » Horse Racing » Bowman a modern-day master but where are the local apprentices?

With Aussie-bred jockeys becoming thin on the ground in NSW Hugh Bowman was a feature of a scintillating if controversial Saturday.

Bowman notched a winning treble at Royal Randwick, hardly a dominating statistic, but was based on horseman’s skill rather than saddle savagery. 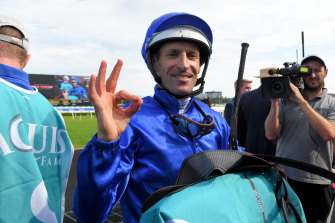 Hugh Bowman worked his magic again at Randwick on Saturday riding a treble.Credit:AAP

Certainly it was a heart stopper for odds-on backers: Dame Giselle (Lonhro) at $1.65 never looked likely nor did Libertini, $1.80 in the Light Fingers at Randwick, while Nature Strip ($1.45) spluttered like a pricked balloon in the Lightning Stakes at Flemington.

Even the odds-on winners produced palpations: She’s Ideel scored by a head in Randwick’s Catanach’s and Alligator Blood ($1.80) had to withstand the fury of James McDonald on Catalyst in the CS Hayes at Flemington.

With whip use very much a hot topic, particularly following the slather-and-wack of McDonald in the dynamic duel with Alligator Blood, the more gentle persuasion of Bowman on Matowi (Heineken), Flit (Light Fingers) and Alizee (Apollo) was uplifting.

Yes, I have gone soft on whip use because modern day standards demand it. Whip restrictions, and more are required, are better than no whip at all.

McDonald’s seven strikes before the 100 metres, a breach by two, and then 21 in total, 14 consecutive, against Alligator Blood contributed to a memorable finish, comparable with the Bonecrusher – Our Waverley Star 1986 Cox Plate epic at Moonee Valley.

Surely, though, had McDonald triumphed – Catalyst went down by little more than an eyelash – Racing Victoria stewards would have had to uphold a protest and reverse the placings.

By comparison Bowman was tame on Alizee when gaining the verdict against Dreamforce, with the assistance of Nash Rawiller, a gyrating powerhouse of swinging arms and heels, but in this instance within the rules of racing.

Of course Bowman is bush bred from Dunedoo but was polished in Sydney into a top-liner by Ron Quinton, a former champion jockey and subsequently a master with apprentice jockeys following the tradition of Theo Green, who transformed raw youngsters into horseback greats.

Like others of his era Quinton rode successfully in Europe when Aussie hoops were major exports. Before him those to gain international honours included Scobie Breasley, George Moore, Ron Hutchinson and Bill Williamson.

Now the pendulum has changed with invaders coming to the fore, especially in NSW. For instance Tom Marquand rode 17 winners in a basically a two-month guest stint here. Perhaps it could be deduced that apprentice Robbie Dolan, from Ireland, doing well currently has gained from the Australian experience while the sweet hands of England’s Rachel King are now matched with judgment of pace gained at Randwick.

Tom Sherry, a newcomer, is another showing ability out of town and his allowance in future will be a major drawcard in Sydney.

Irish veteran Jamie Spencer was booked by the Hawkes team for mounts at Randwick on Saturday.

Alas, Quinton concedes, the teenagers on the local front are diminishing. Could it get to the drought of Aussie-produced equine stayers being dominated by outside talent?