Greg Norman’s American LIV Golf star Kevin Na has entered the Australian Open, one of the few events he can amass world rankings points in given the indefinite lockout of players in the Saudi-backed league.

Na, world No.43, approached tournament officials last month about the potential of making a rare trip to Australia to compete for the Stonehaven Cup, which will feature an all-star local contingent including Cameron Smith, Marc Leishman and Adam Scott.

His name surprisingly appeared among this week’s entries for the event, which is co-sanctioned by the DP World Tour (formerly European Tour).

Na is walking a tightrope to qualify for The Masters in April, with the world’s top 50 players at the end of the calendar year receiving invites to Augusta National.

LIV Golf has finished its maiden season and won’t resume until next year, allowing Na the opportunity to play events besides the PGA Tour, which has banned defectors from featuring in their tournaments.

While Na is yet to make a final decision on whether he will travel for the tournament at Kingston Heath and Victoria Golf Club, he would join Smith (3), New Zealand’s Ryan Fox (24) and Scott (33) as drawcards inside the world’s top 50. 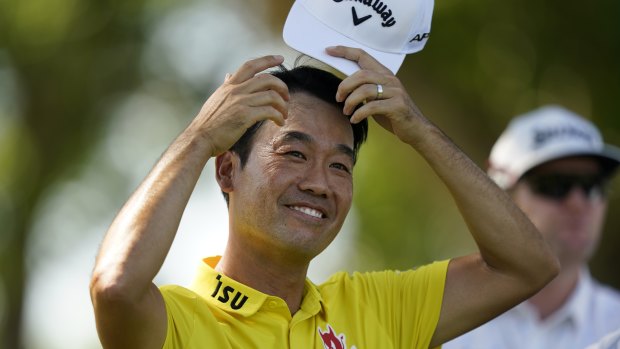 Smith, LIV’s biggest signing to date, is preparing for his ranking to plunge in the next year given world golf’s official rankings body is yet to grant Norman’s plea for points. LIV events are conducted over just 54 holes, have no cut and players are played under a shotgun start.

Na was the first LIV golfer to resign from the PGA Tour to have “the freedom to play where I want,” but that might not include Augusta if he can’t have a strong finish in Australia. Augusta National is yet to decide whether LIV players will be allowed to compete for the green jacket.

The Oceania Golf Players Association, which represents a number of Australian touring professionals, said it had no issue with Na trying to earn rankings points in Australia as local journeymen attempt to scramble into the field.

“I don’t think tours should be in the business of punishing players,” co-president Bryden Macpherson said. “That’s not their job.

“Their job is to provide and grow the tours and promote the sport of professional golf. They shouldn’t be engaged in politics and punishing players for seeking what they think works best for them. That should be a pretty blanket statement across all tours.”

Meanwhile, Harrison Endycott, just one of eight Australians on the PGA Tour, will finish his preparations for an Australian homecoming at the RSM Classic in Georgia this week. He’s already had a top-10 finish in his rookie season and received a tournament invite this week to both the Australian PGA and Australian Open.

He said he skipped last week’s PGA Tour event to concentrate on getting his mind and body ready for the next month.

Asked about an exchange with his coach before returning home, Endycott said: “I said, ‘mate, I land at 7.30, I want to be at the golf course all day. If I have to sleep, I’m done’. That’s kind of what our plan is on Tuesday. Hopefully, we can try and get over that jet lag as quick as we can.”