A vicious virus has wrecked golfing great Karrie Webb's preparations for what could be her last Women's Australian Open.

Webb has been laid low by a throat infection that has cruelled any meaningful practice ahead of the Open starting Thursday at Royal Adelaide. 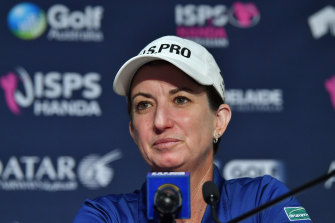 Karrie Webb has been laid low by a virus in the lead-up to the Australian Open.Credit:AAP

"Today is the longest I have been upright for four days so I'm pretty glad about that," Webb told reporters.

"I was only out here for a couple of hours yesterday, I didn't play any holes.

"I don't have a great feel for how everything is going and I'm not 100 per cent energy."

The 45-year-old Webb, a five-time Open winner, was uncertain how many more national championships she would contest.

"I know I don't have many Australian Opens left, so it's just nice to be here," she said.

Webb was uncertain how long she would remain on the LPGA Tour, having played nine tournaments in each of the past two years on the showpiece circuit.

And the seven-time major winner, asked when she would know it was time to leave the Tour completely, replied: "It [the end] could be at the end of the week.

"I don't have any plans, I don't know when I'm going to play again this year," she said.

"I will still play golf. And the great news is I am old enough to play Legends golf now so there will always be a tournament for me to play in."