South Korean golfing icon Inbee Park will have to hold off her country’s new guard to capture the Women’s Australian Open.

Former world No.1 Park, a seven-time major winner, holds a three-shot lead after a superb third round at Royal Adelaide on Saturday. 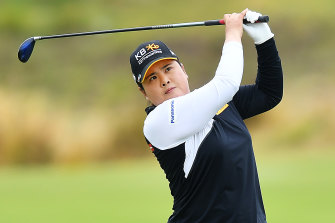 Inbee Park hits her second on the 17th hole during day three of the Women’s Australian Open. Credit:Getty Images

As hopes of an Australian winner faded, Park, eyeing her 20th LPGA title, carded three-under to gain precious breathing space from a chasing pack. But that pack is headed by Park’s 19-year-old compatriot Ayean Cho at 12-under.

Cho is yet to play full-time on the LPGA Tour but has won twice on the Korean tour, where she was rookie of the year last year.

The teen fired a four-under 69 on Saturday to take outright second, while American Marina Alex is at 11-under and French duo Perrine Delacour and Celine Boutier lurking at 10-under.

Delacour produced the round of the day, firing a six-under par 67 highlighted by six birdies on her initial 10 holes. Chasing her maiden LPGA title, Delacour deliberately avoided looking at the leaderboard throughout her hot streak.

‘‘I was just trying to hit a good shot and be in the present, which is hard because I was playing pretty good golf,’’ she said.

‘‘I wanted to keep making some birdies but don’t really look at the leaderboard. But I’m pretty happy with what I did.’’ 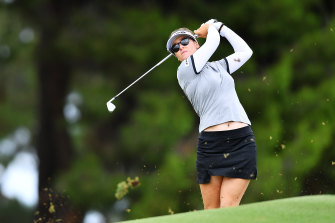 World No.8 Minjee Lee, the top-ranked Australian a field boasting 15 major winners, and 21-year-old compatriot Robyn Choi are three-under. The only other Australians to make the cut, Katherine Kirk (two-over) and Karis Davidson (six-over) are out of contention.