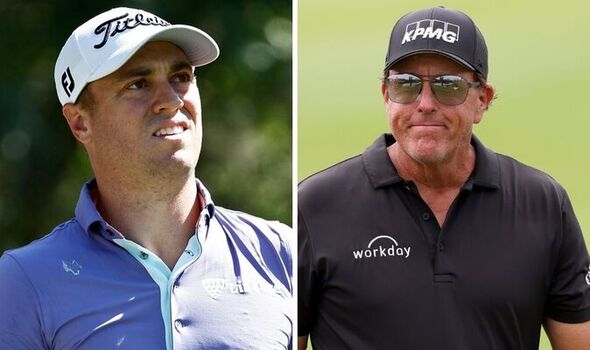 Justin Thomas has taken aim at the likes of Phil Mickelson, Sergio Garcia and Lee Westwood over their continued comments on the controversial Saudi Arabian-backed LIV Golf Invitational Series. The new lucrative tour is aiming to dethrone the PGA Tour as the marquee golf event with promises of huge sums of money to take part.

Greg Norman, CEO and commissioner of LIV Golf, has been outspoken against the PGA Tour and remains confident the Saudi-backed league will be a success. But, earlier this year, most of the world’s top players committed themselves to the PGA Tour and snubbed approaches made for the LIV Golf Series.

That still hasn’t deterred some of the marquee names requesting a release from the PGA Tour to play in the London event, scheduled for June 9-11. However, the players wanting to take part were dealt a blow on Wednesday when the PGA Tour sent out a memo insisting nobody would be given a release.

They’ve maintained their stance that players could also face lifetime bans from the PGA Tour if they take part in the LIV Golf Series. With just under a month until the event takes place at the Centurion Club, all eyes will be on who decides to take part.

And, while Thomas hopes the PGA Tour’s latest announcement would act as a deterrent to the rebels looking to leave, the world No 8 has challenged those speaking out to follow their words with action.

“I would hope it would deter them from going over there,” Thomas said Wednesday during a news conference ahead of this week’s AT&T Byron Nelson at TPC Craig Ranch. “I think [PGA commissioner Jay Monahan] made it very clear from the start of what would happen. I think a lot of people are probably like, ‘I can’t believe you did this,’ or, ‘Wow, you went through with it.’

“But this is what he said was going to happen all along. And, yeah, it’s one of those things to where he just doesn’t want the competing tour, the back-and-forth.” He added: “It’s like, ‘Look, if you want to go, go’.

“There’s been plenty of guys that have been advocates of it and have just talked it up all the time, and there have been guys behind the scenes that are saying, ‘I’m going, I’m doing this.’ And like my whole thing is, like, just go then. Like, stop going back and forth or like you say you’re going to do this.