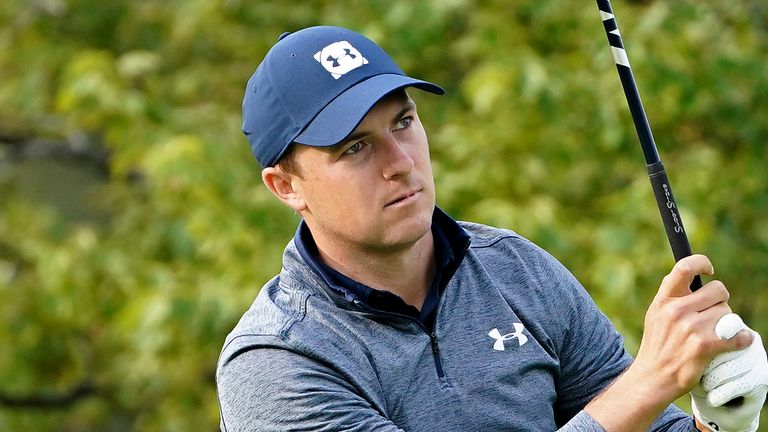 Jordan Spieth fired a sensational, career-best 61 as he powered into a share of the third-round lead with Xander Schauffele at the Waste Management Phoenix Open.

Although just 5,000 spectators per day are being permitted through the gates at TPC Scottsdale, they made the noise of 50,000 as Spieth produced a barrage of birdies on the back nine, wielding a red-hot putter to atone for the odd wayward drive.

Schauffele refused to be distracted by the exploits of Spieth, two groups ahead, and the overnight leader birdied four of the last six holes to return a creditable 65, but Steve Stricker’s hopes of dethroning Sam Snead as the oldest winner in PGA Tour history took a hit as he carded a 69 to slip five strokes off the pace.

After back-to-back 67s gave a clear indication that his confidence was returning, Spieth said on Friday evening: “If I shoot six under on Saturday, awesome.” And he went beyond “awesome” by four shots to put himself within touching distance of a first win since The Open of 2017. Spieth opened with two steady pars and took care of the par-five third before sinking a 20-foot putt for birdie at the next that set the tone for his round, while two more gains swept him to the turn in 31.

Schauffele would have heard the cheers up ahead when Spieth pitched in from long and left of the 10th green for a bonus birdie, and he stiffed his 170-yard approach to the next before setting up a four-foot putt for eagle with another fine strike at the 13th.

Spieth could not convert the chance and settled for a birdie, but he picked up another at the long 15th, and then sent the limited crowd in the stadium surrounding the 16th into raptures when he nailed a 35-footer for his ninth birdie of a remarkable round.

The former world No 1, currently ranked 93rd, almost took out a few fans to the right of the 17th fairway and clipped a cautious pitch to the middle of the green, but the noise levels ramped up once again as he poured in yet another long-range putt which gave him the outright lead at the time.

A solid par at the last capped a round to remember for the 27-year-old, and his best score on the PGA Tour, and it was almost fitting that Schauffele narrowly missed a birdie chance from 11 feet with the last putt of the day that would have robbed Spieth of a share of the 54-hole lead.

Scottie Scheffler will complete Sunday’s final threeball after a 66 lifted him to 15 under alongside Kyoung-Hoon Lee, who pitched in for eagle at 17 and then birdied the 18th to card his third consecutive 66 this week.

Louis Oosthuizen (63) and Justin Thomas (64) will begin the final round with four shots to make up on the leaders, while Brooks Koepka appeared to be out of contention until he closed out a 66 with four straight birdies, elevating him to 13 under with Stricker.

Jon Rahm could not get much going early on and needed four late birdies to get into double-figures under par, but Rory McIlroy can look forward to another early tee time on Sunday, after missing a series of early chances and managing only two birdies in another disappointing 70.